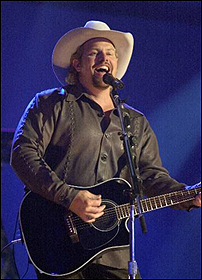 Never mind that ABC's Peter Jenning's canceled Toby Keith's performance on the network's July 4 special after deciding his lyrics to "Courtesy of the Red, White and Blue" were too controversial for prime time. Keith set a new concert attendance record at the Greeley (CO) Stampede on June 29, when 14,004 people attended his Island Grove Arena concert.

Keith's wrote the song with the "questionable" lyrics, "You'll be sorry you messed with the US of A ’cause we'll put a boot in your a–. It's the American way,” shortly after the September 11 attacks as a tribute to his father, an Army veteran who lost his right eye in a combat training mission.


Neighbors of the proposed 18,000-seat amphitheater to be built in Vancouver, WA , are planning to sue for loss of property values due to potential noise pollution.

The Fairgrounds Neighborhood Association said the draft lease between Clark County and Quincunx, a subsidiary of entertainment management company Q Prime, the developer of the amphitheater, should include an ironclad provision protecting the county from those lawsuits.

Quincunx is building the amphitheater at its own expense and then will turn it over to Clark County, which then will lease it to the company for $20 million for 25 years.

Concerned neighbor Wayne Wanke told the committee that noise and traffic inevitably will lower property values in the area, and homeowners will sue. "It would be wise and fiscally responsible for the county to address the issue in the lease agreement with Quincunx," he said, as reported in the Columbian. "Otherwise, county taxpayers will be liable for compensating property owners for their losses as well as making up for the reduction of property tax revenue from those declining assessments."

Neighbors have fought three years against the amphitheater. Since 1999, neighbors have filed four unsuccessful appeals, including one to the state Supreme Court, arguing that the county did not adequately address the cumulative effects of noise and traffic on the surrounding area.

"Jared's background and expertise in so many facets of entertainment, including television, magazines and live entertainment makes him the perfect candidate to understand the multifaceted nature of Radio City Entertainment," said Ed Micone, executive vice president, Radio City Entertainment. "We're looking to Jared to help expand RCE into un-charted territory. Jared will be a true asset to our new business vision, and we're excited to have him as part of our team."


The Phantom Of The Opera Breaks Records In Toledo

"The Phantom of the Opera" shattered all previous box office records at the Stranahan Theater in Toledo, pulling in ticket sales of $225,118, during its on sale weekend June 21-24. Patrons from as far as Ann Arbor, MI; Lima, OH; Fort Wayne, IN and Windsor, ON scooped up tickets during an Internet only pre-sale June 21-23 and on June 24, the first day of regular ticket sales.

"We are thrilled with the incredible response Phantom has received from single ticket buyers," said Theater League president Mark Edelman. "Also, the group sales phones have been ringing off the hook. Phantom will be a great holiday season event not only for Toledo but also Northwest Ohio and Southern Michigan."

The Cameron Mackintosh/Really Useful Theatre Company, Inc production of Andrew Lloyd Webber's "The Phantom of the Opera," directed by Harold Prince, will begin a three-week premiere, holiday season engagement at the Stranahan Theater in Toledo, on December 26, 2002 – January 12, 2003. Tickets are priced $65-$20.

With worldwide box office sales of over $3 billion, "The Phantom of the Opera" is the most successful entertainment venture of the twentieth century, surpassing such blockbuster films as Titanic, E.T., and Star Wars. Phantom had its world premiere on October 9, 1986 at Her Majesty's Theatre in London, winning every major British theatre award including the Olivier and Evening Standard Awards. The Broadway production opened on January 26, 1988, and is the winner of seven Tony Awards, including Best Musical.

Phantom celebrated its milestone 10th anniversary on Broadway on January 26, 1998 and is currently Broadway's fourth longest-running show of all time. Worldwide, "The Phantom of the Opera" consistently plays to larger audiences and in longer engagements than any other musical in history.

The Toledo engagement of "The Phantom of the Opera" is presented by arrangement with Theater League and Clear Channel Entertainment, and is a subscription offering 2002-2003 Theater League Series.

AUSTIN, Texas (AP) — The Hole in the Wall, a nightclub near the University of Texas campus that was a fixture in Austin's live music scene, has closed after 28 years.

The Hole in the Wall shut down Sunday after a last night of business that turned into a party for regulars, musicians and newcomers.

The club's lease expired at the end of June, and the building is for sale for $972,000. Renting month to month was an option, but the bar's liquor license was up for renewal in August.

Over the past month, some prominent musicians revisited the Hole for a fund-raising festival, donating their take to help the bar pay its debts, which mostly includes back payroll taxes. The concert series, called 30 Days in the Hole, aimed to raise more than $15,000.

The profits barely made a dent in the debt, Rombach said.

She said she might reopen the Hole in another location if she can find a place where the rent isn't too high.

The Hole opened in 1974 as a neighborhood bar. Early on it was largely supported by the video arcade in the back room. From the first year, it was a music spot.

Nanci Griffith played there in 1974, earning $15 a night, along with tips and drinks. Steve Earle, John Reed and Charlie Sexton have left their musical footprints there.