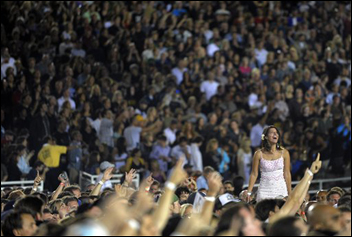 LOS ANGELES, CA (CelebrityAccess MediaWire) — When it wraps up this week, the U2 360° Tour will have played to over 3 million fans in just 44 cities. With record shattering sales including the largest attendance at the Rose Bowl as well as setting the all time record at New York’s Giant Stadium where the audience surpassed that of the Pope – the largest rock and roll touring production ever has just confirmed the return to North America beginning June 6th at Anaheim’s Angel Stadium. The tour is once again produced by Live Nation Global Touring and sponsored by BlackBerry.


Having performed in a limited number of North American cities in 2009, U2 360° is set to touch down in a new set of stadiums next summer including stops in Anaheim; Denver; Oakland; Seattle; Edmonton; East Lansing; Miami; Philadelphia and Montreal. Due to overwhelming demand, U2 360° will also return for one night only in Toronto and Chicago before finishing the North American leg in New York at the New Meadowlands Stadium.
With sell-outs already reported for the 2010 European tour including Denmark (2 shows sold out); Brussels (2 shows sold out); Helsinki (2 shows sold out) and Coimbra (2 shows sold out); and Paris where over 90,000 tickets were sold for a third show at that venue, U2 2010 will offer fans who missed out a new opportunity to experience the U2 stadium spectacle.
With a cylindrical video system of interlocking LED panels, and a steel structure rising 150 feet from the floor over a massive stage with rotating bridges, the band has truly created an intimate 360º experience for concert goers. In keeping with the concept that this tour is more about a unique staging configuration with excellent sight-lines, tickets for the U2 360° 2010 tour will once again be scaled so that 85 percent of the tickets are priced at less than $95.00, general admission floor tickets at $55.00 and at least 10,000 tickets per venue priced at $30.00.