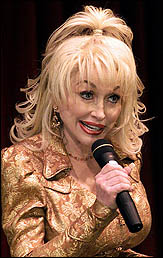 Dolly Parton is undertaking a rare, intimate club tour, hitting the road for the first time in a decade with House of Blues promoting the 13-city "Halo & Horns Tour,"
beginning July 10 in New York and concluding
August 31 in Kansas City. It will also stop at six of the eight HOB club venues.

Parton will be promoting her new CD, Halos & Horns (Sugar Hill Records), which
will be released on July 9.

"Dolly Parton is a legendary artist," says Kevin Morrow, vice president,
House of Blues Entertainment, Inc. "It's an honor to welcome Dolly to our
stages and to bring House of Blues audiences an intimate and unforgettable
experience."

House of Blues is leveraging its membership database and is partnering with
America Online and Dolly Parton fan sites to ensure that core Dolly Parton
fans get their tickets first. A customized micro-site has been created for
the event, where fans can purchase pre-sale tickets and hear song clips from
the Halos & Horns CD. Beginning Friday, June 14 the micro-site will also
feature a sweepstakes to win a weekend trip for two to attend Parton's live
show at House of Blues Las Vegas on August 10.

club members, The Tragically Hip is known for doing some isolated, intimate shows right after a new album is released but before kicking off its tour. With the release of their latest album, In Violet Light, the Hip is publicizing the concerts for the first time.

Shows in Toronto, Buffalo and Detroit will consist of performances and audience questions and will have radio broadcasts. However, the Burlington show, taking place on a ferryboat on Lake Champlain, will not be broadcast. Additionally, the Toronto show will also be webcast by many of the participating radio stations and fans can submit questions online.

Tickets are available only by listening to participating radio stations or by entering a random draw at The Hip Club. Winners will be notified by email of the show location.

The first leg of the tour includes make-up dates in addition to new shows and runs through September 1 in Toronto. The second leg, beginning September 20 in San Antonio, continues through October 19 in Salt Lake City.

Pavarotti Set To Perform With Phoenix Symphony On September 20

some horrendous press from two recent cancellations at the Metropolitan Opera in New York, Luciano Pavarotti is confirmed to perform with the Phoenix Symphony on September 20. The concert date's ticket prices are $300-$40. Pavarotti is now in his 41st year of professional concert and opera performance. The appearance will be his first in Arizona for the popular member of the Three Tenors since 1985.

The X-Ecutioners, the pioneering DJ
crew who've spearheaded a revolution in "turntablism," will play a unique role on the
"Anger Management" shows.
In addition to performing their own set featuring material, the group will DJ four
additional sets between the other acts' performances, turning the entire event into
one big, non-stop party. Joining the X-ecutioners as guest MC for these dates
will be
"Dstroy" from the Arsonists; Boogie Blind (current Vestax World Champion) will
also
guest DJ during the X-ecutioners' performance.

has cancelled all their upcoming concert plans due to further deterioration in the health of the band's lead singer and guitarist, Daniel Johns, who is suffering from a severe case of reactive arthritis. The condition's primary symptoms are chronic swelling of the joints resulting in impaired movement and extreme pain.

"I'm truly sorry that I am not able to do the touring we had planned for so long," said Johns. "I apologize for the inconvenience these cancellations will cause. I am doing everything humanly possible to try and get well, but lately things have just kept getting worse."

"These cancellations are a major disappointment to the band," said the group's manager, John Watson. "The guys were really looking forward to finally getting out there and playing shows. However, the rapid decline in Daniel's health over the last two weeks in particular has simply made this physically impossible for him."

Johns contracted reactive arthritis late last year. In the majority of cases, the condition only lasts for approximately three months. However, new medical tests have revealed underlying complications, which appear to be preventing Johns from fighting off the virus which triggers this form of arthritis. His doctors remain certain that the condition is not life threatening and that he will eventually make a complete recovery.

formerly of Lucy Pearl and Tony! Toni! Tone!, is gearing up for a two-week tour in support of the June 11 release of Instant Vintage (Pookie/Universal), his first-ever solo album. Starting June 3 in Chicago, he will play theatres and clubs throughout the U.S and is especially excited about hitting the road on his own for the first time. As he proudly declares, “The ‘Instant Vintage’ tour is going to be better than every other time that you’ve seen me in your city. You can expect to see me expand my horizons all over the stage, because no one that you know will be to the left or right of me. This time around, it’s all me.”

Liza Minnelli Sells Out Opening Night At The Beacon

seven show run at The Beacon Theater in New York has been described as a bit soft, but opening night May 31 was a sellout when an unnamed angel reportedly went to the box office and scooped all the unsold tickets for a whopping $87,000. Those tickets were reportedly given to the police and firemen. Tickets for the shows are a steep $1,000-$500-$250-$125-$85-$50 with special V.I.P. ducats that included dinner with Minnelli. Even though there are plenty of tickets still available, print ads stopped about a week before opening night. Minnelli's performances are scheduled for May 31, June 1, 3-4, 6-8.

"We're going back to playing the arenas this year and I’m really looking forward to it," said Strait decidedly. "We definitely had a great time doing the stadiums but I’m excited about seeing some faces again. Not that 20,000-seat arenas are exactly intimate settings, but you can tell a difference and I think it will be a fun change of pace."

Joining Strait will be JoDee Messina who played the opening slot for Strait at his sold-out show in Memphis and Lafayette earlier this year.

Tickets for Dallas, San Antonio and Columbus, Ohio go on sale July 13. All other on-sale dates are TBA

Chevy Trucks and GM Card are returning as corporate sponsors.

has canceled the remaining dates on its European tour following a tour bus crash in Spain last week that killed the driver and left band members injured. All US dates through September have also been canceled.

Heralded by USA Today ("Strong vocals and great cast make 'Love' happen"/February 21, 2002), "Love Makes Things Happen" is the heartwarming story of Sheila Carter, a good-looking, sharp-dressing, soul sistah at the crossroads of an ill-fated relationship. One night, while exiting the company elevator, she bumps into Chauncy Brown, who is handsome, charming and single — so, it's all good! Well, almost … now Sheila, who makes six figures a year, has to decide if she can really love a man who only makes six dollars an hour.

"Love Makes Things Happen" is written and directed by David E. Talbert. Heralded by the Los Angeles Times as "one of the most prolific theater makers in America," Talbert has toured nine plays, seen by over 2.5 million theatergoers. He received two NAACP Theater Award nominations for his plays "Lawd Ha' Mercy" and "His Woman, His Wife." His play "The Fabric Of A Man" won three NAACP Theater Awards. Talbert's independent feature film, "A Woman Like That," won the Urban World Film Award for Best Dramatic Feature. In television, Talbert's play "He Say, She Say … But What Does God Say?" was adapted to create the UPN sitcom "Good News." Two of his gospel musicals, "Mr. Right Now" and "His Woman, His Wife," have been released on home video.

This play is the first in the national Urban Broadway Series, which will present plays, musicals and gospel-themed theatrical events, which encompass contemporary African-American experiences. Under the direction of David E. Talbert, the Urban Broadway Series produces quality live theatrical events through creative collaborations with the entertainment industry's leading writers, directors and performers.

Hagar/David Lee Roth co-headlining tour kicked off on May 29 at the Blossom Music Festival in Cuyahoga Falls, Ohio, which was reportedly only half-filled to capacity. Hagar performed 17 songs while Roth 19 songs, both playing many vintage Van Halen chestnuts and some from their solo careers. Roth was the headliner on opening night; Hagar headlines on alternating nights. Eddie Van Halen's presence was felt when a cardboard stand-up figure of him popped up in the audience during Hagar's set, which he slapped in the head.

Butch Vig, who could not make the European tour last fall due to illness, is again unable to perform on Garbage's current tour. Vig is suffering from "an acute inner ear infection causing painful sensitivity to sound," according to the band's website reports.

Session drummer Matt Chamberlain, who has manned the skins for Fiona Apple and Tori Amos, will be filling in for him until he recovers. Chamberlain began sitting in May 31 in San Diego.

Last November Vig sat out dates on a European tour after contracting Hepatitis A, an illness that turned his skin and eyes yellow and left him unable to walk. Chamberlain, who played on some tracks on the band's most recent album, filled in for those performances as well.