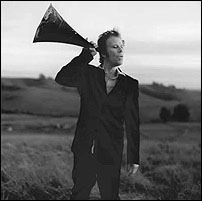 (CelebrityAccess News Service) — Tom Waits has won the opening stages of a legal battle against a Spanish production company that adapted his music and impersonated his voice for a television commercial despite Waits' refusal to allow his original version of the song, Innocent When You Dream, to be used for the advertisement. A court in Barcelona has ordered the company, Tandem Campany Guasch, to pay compensation to Waits' publisher in Spain, Hans Kusters Music, for violation of copyright.

The commercial for Audi cars was screened in Spain in 2000. As well as having the same structure as Innocent When You Dream, the commercial's music was also performed in a Waits' style. The favorable court judgment thus recognizes there has been a violation of Waits' moral rights in addition to the infringement of copyright.

Volkswagen-Audi Espana (VAESA), originally a defendant in the action brought by Waits, was cleared by the court.

Waits first learned about the commercial from Spanish fans posting on various websites. Many believed it was Waits singing his own song on the commercial, even despite the fact he has always been adamant that his music will never be used for advertising purposes. Indeed, Waits rejected Tandem Campany Guasch's original approach to use Innocent When You Dream.

The action against Tandem Campany Guasch — a groundbreaking copyright judgment for the Spanish courts — is the latest in a line of successful legal actions Waits has taken to prevent his music and image from being associated with commercial products. –Bob Grossweiner and Jane Cohen