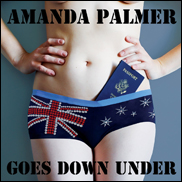 The number one complaint I get about Amanda Palmer’s success is her music sucks.

I’ll tell you one thing, it’s not mainstream, it’s never going to be embraced by everybody, but Ms. Palmer has created a lucrative niche that others desire to inhabit, so they watch her TED talk believing they’ll learn how.

But that’s the wrong clip to play.

It’s late Sunday night and I’m reading the “Wall Street Journal” and I come across this:

In recent years, University of Pennsylvania psychology professor Angela Duckworth has studied spelling bee champs, Ivy League undergrads and cadets at the U.S. Military Academy in West Point, N.Y. – all together, over 2,800 subjects. In all of them, she found that grit – defined as passion and perseverance for long-term goals – is the best predictor of success. In fact, grit is usually unrelated or even negatively correlated with talent.

Prof. Duckworth, who started her career as a public school math teacher and just won a 2013 MacArthur ‘genius grant,’ developed a ‘Grit Scale’ that asks people to rate themselves on a dozen statements, like ‘I finish whatever I begin’ and ‘I become interested in new pursuits every few months.’ When she applied the scale to incoming West Point cadets, she found that those who scored higher were less likely to drop out of the school’s notoriously brutal summer boot camp known as ‘Beast Barracks.’ West Point’s own measure – an index that includes SAT scores, class rank, leadership and physical aptitude – wasn’t able to predict retention.”

Why Tough Teachers Get Good Results


When I was a sophomore at Middlebury College, I joined the ski team. Coached by legendary Nordic skier John Bower, in September we had to work out three times a week, October four times and November five. In December we hit the snow.

To say the conditioning was tough would be an understatement. We had to run up the Middlebury College Snow Bowl, even worse, we then had to run halfway down and run back up again. And although the altitude in the east doesn’t measure up to that of the west, the vertical rise exceeds 1,000 feet, and you had to make it up in under twenty minutes, hopefully in the neighborhood of fifteen. And if you didn’t want to puke when it was done, you weren’t human.

But that was a cakewalk compared to the bleachers.

That was one rep.

We started with four reps.

And when I was done, I called my mother, I wasn’t only ready to quit, I’d already decided, this was way too rough, especially since the Middlebury squad featured Olympians, and I was far from their league.

But my mother bad-vibed me. And nothing cuts at you like disapproval from a parent.

So I thought about it for two days and went back to the gym.

By time the snow was falling, we were up to sixteen reps, seemingly undoable, but I did it.

Kind of like this newsletter. I don’t care if you think I’m the best writer or the worst, but one thing you’ll notice about me is I never give up. Oh, over the years people have entered my territory. But each and every one has given up. Most outright, others took jobs at the corporation. So I’m the last person standing. And as a result, I’m king of the hill.

Oh, you might be able to beat me. But you’ll have to start today and go for twenty seven years…yup, that’s how long I’ve been writing “The Lefsetz Letter,” it used to cost money and be mailed via the US Postal Service, some remember, I certainly do, along with being so broke I had less than twenty dollars in my bank account and lived off Michelina’s frozen dinners, which I bought in bulk when they went on sale for ninety nine cents.

And what have you learned as a result of this?

Other than that, I’m not sure what lessons you can learn from me. But that’s what every successful person has, grit.

So I’m reading the WSJ and I’m also thinking how my mother told me for decades I was lazy, to the point I came to believe it, especially since I was financially-challenged. But then I came to realize no one worked harder, if I was interested in something there was no time limit.

And I jumped up from the table and started googling. And instantly found Ms. Duckworth’s grit exam.


Oh, you can finagle the answers, you can lie, but you’ll only be lying to yourself. Kind of like all those Ivy League grads who believe they’ll be happy in finance, since it pays so well. But Ms. Duckworth gave up her job at McKinsey, to teach school, and inspired by that experience she got a graduate degree in psychology and formulated her theory of grit.

Amanda Palmer graduated from college, a damn good one, Wesleyan. And then she was a living statue. Imagine telling your parents, that they spent 250k and you’ve decided to become a street performer, a veritable beggar.

But if you want to take an alternative route, you’ve got to possess grit.

As for all her tweeting and kickstarting and social networking…yes, you can glean some good ideas from listening to Amanda’s TED talk, but that’s not what made her successful. No, those are just the end results. Amanda Palmer is successful because of her identity, her grit.

And there are so many other qualities that go into the stew. Like human interaction, and the willingness to fail. The grittiest person will not make it if they don’t take risks, if they don’t put it all on the line and occasionally experience defeat.

Do I think everything I write is great?

I never write anything terrible, because I’ve been doing it so long, I’ve developed skills. But rather than try to edit myself and only send the best stuff, I send everything I write, because I never know what will resonate with my audience.

But it pains me to send something mediocre, and to get criticized, or even worse, get no response whatsoever. But rather than lament hitting send, I realize that tomorrow’s a new day, I can write again, I can try to ring the bell once more.