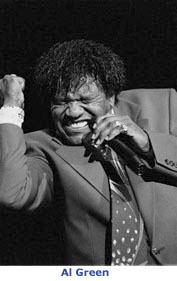 By Bob Grossweiner and Jane Cohen

The 12th Annual Pioneer Awards of the Rhythm & Blues Foundation were given out at New York's Apollo Theatre on November 8, marking the first time the awards have been handed out at the Harlem landmark, which opened in 1913.

The Pioneer Awards are announced months prior to the induction ceremony, which gives honorees ample time to make travel arrangements. There are always some no-shows, but Al Green, the recipient of the Lifetime Achievement Award, was scheduled to arrive in New York on the afternoon of the ceremony. However, the Reverend failed to appear using the excuse that one of his parish members needs some preaching.

Other no-shows were Sly Stone, who is never expected at ceremonies, and Allen Toussaint.

The show was mercifully short, less than two hours, after a late start where the R&B Foundation could not get a smooth ticketing entrance into the venue. Finally, everyone on line was allowed to enter without first picking up their tickets. There were also some spirited performances, most notably by Dee Dee Sharp ("Mashed Potato Time"), Fontella Bass ("Rescue Me") and tenor saxophonist Big Jay McNeely, who arrived on the stage from the audience and wound up playing on his back.

It was a relatively sedate evening until bassist Larry Graham of the Family Stone ranted and raved in one of his patented educational and embarrassing diatribes. "We're not through yet," he said, referring to a Family Stone reunion. "Michael Jordan came back." But he went on and on about not owning the masters of their music, alluding to the big houses the owners of the music have while theirs is not quite so big.

The Pioneer Awards are the only awards that give cash honorariums to the inductees — $15,000 to individuals and $20,000 to groups — and the Family Stone kept theirs. Prince, who was in the audience, partially since Graham records on his label, exited right after Graham left the stage. Prince allows artists on his label to retain their own masters.

The festive gala started with a VIP party at the Magic Johnson movie complex down the street and concluded with everyone on a stage for a brief jam.