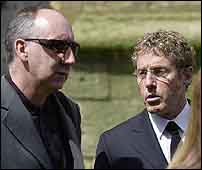 A private funeral service for Who bassist John Entwistle is scheduled for today,
July 10 in London for family and friends, according to his Web site
(www.johnentwistle.com). Surviving Who members Pete Townshend and Roger
Daltrey are expected to attend. Another service will be held in London later this
year where fans will be asked to join in and celebrate his life. The Entwistle family
has asked that in lieu of flowers, donations be made in John's name to two British
charities: The Teenage Cancer Trust (www.teencancer.org) and the British Heart
Foundation (www.bhf.org.uk).

CHICAGO (AP) — Jimmie Lee Robinson, a Chicago blues stalwart known for his pointed lyrics and storyteller's sensibility, was found dead in his car Saturday on the city's southwest side. He was 71.

He had a single gunshot wound to his head and his death was ruled a suicide, the Cook County Medical Examiner's office said.

Robinson, who recently was diagnosed with bone cancer, changed his name to J.L. Latif Aliomar in a religious conversion two years ago.

But he was better known by his original name and as one of Chicago's top sidemen in the 1950s. A decade later, he had become a blues headliner in his own right.

"Jimmie Lee definitely qualified as a blues legend, but in hard-core circles," said Marc Sheforgen, associate director of APO Records, which was Robinson's recording label since 1998.

In the 1970s, Robinson left the music business when the blues went into decline. He ran a jitney taxi service, worked as a carpenter and opened a store before reviving his career more than 20 years later.

Robinson capped his comeback with an 81-day hunger strike in 2000 to protest gentrification on Chicago's historic Maxwell Street, where he was born and raised.

While a wrecking ball demolished a brick facade behind him, Robinson sat on a stool with an old acoustic guitar and performed "Maxwell St. Teardown Blues," which became his signature song.

He had just finished his last recording before he died, according to APO Records. A release date has not been set.


SAN JOSE, Calif. (AP) — Gene Kan, a pioneering developer of the music-swapping Web site Gnutella, has died. He was 25.

Kan died as a result of an accident, according to a statement released Monday by his employer, Sun Microsystems Inc. At the request of his family, no other details of his June 29 death were being released, Sun officials said.

While at Gnutella, Kan was a programmer who often served as the spokesman during file-swapping debates swirling around the Napster controversy.

Then in June 2000, Kan started Burlingame-based InfraSearch Inc., a peer-to-peer search engine technology company that he co-founded. It attracted high-profile investors such as Netscape alums Marc Andreessen and Mike Homer. Most recently, Kan worked on advanced projects at Sun Labs, pushing the envelope in distributed computing.

"Gene contributed much to the industry, specifically in the peer-to-peer space," Sun said in the statement. "Gene brought new ideas to the organization and stretched our thinking. Gene was a trusted friend and colleague, and we will miss him greatly."

A memorial fund is being established in Kan's name at the University of California, Berkeley's College of Engineering, where Kan graduated in 1997 with degrees in electrical engineering and computer science.

No public services are planned.


NEW YORK (AP) — Lore Noto, producer of "The Fantasticks," the world's longest running musical, died Monday after a long battle with cancer. He was 79.

It was Noto, a former actor and artists' agent, who saw the possibilities in a small one-act show written by Tom Jones and Harvey Schmidt when it was first produced in 1959 at Barnard College in New York.

He commissioned the authors to expand the musical, which eventually opened at the tiny Sullivan Street Playhouse in Greenwich Village on May 3, 1960. It ran for 17,162 performances, closing last Jan. 13, a more than 40-year run.

Following that final performance, Noto climbed on stage as the show's simple white curtain was slowly lowered to the ground.

"Sort of like the New Year's Eve ball coming down in Times Square," he said. "We're setting the bar at 17,162. And God bless and good luck to anybody who wants to beat it."

The musical, with book and lyrics by Jones and music by Schmidt, told the affecting tale of first love. It's the story of a young girl and young boy, secretly brought together by their fathers and an assortment of odd characters who include a rakish narrator, an old actor, an Indian named Mortimer and a Mute.

Over the years, scores of performers appeared in the New York production. Among the musical's better-known alums are its original El Gallo, Jerry Orbach, and such soap-opera stars as Eileen Fulton and David Canary. F. Murray Abraham, long before his Academy Award for "Amadeus," played the Old Actor for a while in the '60s.

Even Noto went into the show. Early in the show's run, he went on in the role of the boy's father and played the part, off and on, for 17 years.

Noto is survived by his wife, Mary, and four children.