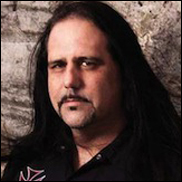 
Rolling Stone magazine reported that he was playing at a birthday celebration for Rigor Mortis singer Bruce Corbitt when he collapsed on stage in Texas.


He was rushed to hospital, where he was pronounced dead.


He continued: "Mikey was not only the best guitar player in the history of music, but he was a close, close, close part of our family – and I just lost a huge chunk of my heart today.


"Our lives are forever changed. Life without Mikey is like orange juice without pulp – kind of bland."


Combining a savage and dense rock sound with their shared love of horror films, the band almost single-handedly created a death-metal scene in their native Texas.


Unusually, they were signed to a major label – Capitol Records – and released one album before being dropped due to poor sales.


'The greatest'
Jourgensen invited Scaccia to join Ministry in 1989, and he played on the band's most commercially-successful album, Psalm 69: The Way to Succeed and the Way to Suck Eggs, in 1992.


He also contributed to spin-off projects by bands such as Lard and Buck Satan and the 666 Shooters, and was part of a well-received Rigor Mortis reunion in 2003.


According to the Fort Worth medical examiner, the guitarist died of a sudden heart attack brought on by a heart disease.


Rigor Mortis vocalist Corbitt paid tribute to his friend on Facebook, calling him "the greatest guitar player I ever knew".


"My brother is gone," he wrote. "The only reason I am who I am is because of this man. If it wasn't for him I wouldn't even be in a band." –According to BBC