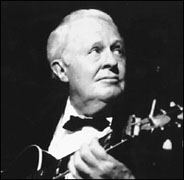 LOS ANGELES (CelebrityAccess MediaWire) — Herb Ellis, the legendary jazz guitarist and member of Oscar Peterson Trio, died after a battle with Alzheimer's disease at his Los Angeles home on March 28 at the age of 88.

Ellis was one of the early innovators who helped to shape what would become the modern jazz guitar style, fusing the metropolitan sounds of early bebop pioneered by performers such as Charlie Christian with more rustic styles drawn from early country music.

Hailing from Farmersville, Texas, Ellis attended North Texas State Teachers College, one of the first schools to offer a jazz program, but in 1940, he left school before he graduating to hit the road with a touring band.

Ellis went on to play with the Glen Gray and the Casa Loma Orchestra and the Jimmy Dorsey Band, where he laid down some of his first known recorded solos. Ellis helped to found the jazz vombo Soft Winds before eventually joining The Oscar Peterson Trio.

The Oscar Peterson Trio toured very actively and frequently served as a session band for Verve Records giving Ellis the opportunity to performe alongside of other jazz greats such as Stan Getz and Dizzy Gillespie before he left the group in 1958.

Through the 1960s, Ellis continued to perform, including touring and recording with Ella Fitzgerald for several years before settling into Los Angeles where he worked as a session musician while maintaining an active recording career and television personality.

According to the New York Times, Ellis is survived by a son, daugher, his wife of 52 years and three grandchildren. – CelebrityAccess Staff Writers