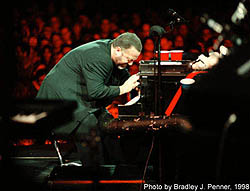 By Bob Grossweiner and Jane Cohen

Billy Joel stole the show at the Songwriters Hall of Fame Induction and Dinner held June 14 at the Sheraton New York Hotel & Towers. His acceptance speech was part ad-libbed, part pre-prepared and above all, humorous and thankful. Marc Anthony sang a moving rendition of Joel's "Innocent Man" while it took three people — Anthony, Hal David and Jimmy Webb — to award the Piano Man. Backstage, all event participants signed two guitars, to which Joel wondered why no piano — he writes on piano.

Via a taped induction by matchbox twenty's Rob Thomas and later Dave Matthews singing "Funny How Time Slips Away," Willie Nelson was inducted in a pretty straightforward presentation. Clive Davis inducted Diane Warren with Deborah Cox singing "There You'll Be."

In an unusual pairing but lots of comedic appeal, Judy Collins and the frisky Kermit the Frog inducted Paul Williams, who was truly taken aback by the honor, which continued with Willie Nelson singing "Rainbow Connection." An overly gushy Paul Shaffer inducted Dolly Parton in his inimitable "Late Night" fashion while Emmylou Harris responded with a nice version of "To Daddy." Parton was her cheery, effervescent self.

Eric Clapton, who is on tour, was not present, and unlike most award shows, he was not given a formal presentation — the only real bummer of the evening. It was mentioned in passing at the top of the under two hours-streamlined show.

Jon Secada, a protege of Gloria and Emilio Estefan, inducted the Estefans and also sang "Coming Out of the Dark." The whole segment was like a family reunion with Gloria talking about how the song was written a few months after her automobile accident.

Richard Belzer introduced the song "Let Me Call You Sweatheart" into the Hall, but the unexpected highlight of the evening came from the whistling and acoustic rendition of the song by Dominic Chianese, who plays "Uncle Junior" on "The Sopranos."

For Dionne Warwick's "Hitmaker's Award," part of the ceremony was kept in the family with her cousin Whitney Houston introducing her. Elvis Costello (sans Burt Bacharach) then crooned "Walk on By."