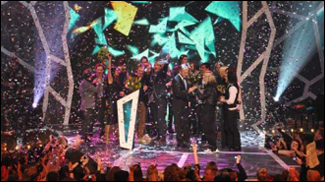 GRONINGEN, UK (VIP NEWS) — The winners of the 2010 European Border Breakers Awards (EBBAs) have been chosen and will receive their awards in a ceremony presented by British TV personality Jools Holland in Groningen on 14 January 2010.


The show will be attended by Maroš Šefèoviè, the European Commissioner for Education, Training, Culture and Youth and will be broadcast on television throughout Europe. This year’s awards also include an exciting new category the 'Public Choice EBBA', which will be voted for by the European public for the first time ever.


The European Border Breaker Awards are given to debut artists or groups for their success in crossing national borders and reaching audiences outside their own country. They are given by the European Commission, in cooperation with the European Broadcasting Union (EBU).


The Awards highlight the need to make wider use of the potential of the common market in which musical consumption patterns are still predominantly national in nature. Therefore they aim to stimulate the mobility of artists and the circulation of their work within Europe and beyond, as well as to raise awareness and appreciation among audiences of music from outside their national borders.


The winners of the 2010 European Border Breakers Awards are:


The award ceremony will be recorded and broadcast by Dutch National Television (NOS) and the show will receive European coverage through the EBU broadcasting network of European television and radio stations.


This is the seventh edition of this successful European Union award, with which the European Commission – in close partnership with the European music industry – highlights the creative richness and diversity of European contemporary music.


The voting for the Public Choice Award takes place online at www.europeanborderbreakersawards.eu from mid-November until the end of the year. The voting is supported by EBU radio stations throughout Europe.


The winner of the Public Choice EBBA will be announced during the ceremony on January 14th in Groningen.


The artists receiving this award are selected on the basis of statistics provided by the Billboard Information Group, the European Broadcasting Union (EBU) and the European Talent Exchange Program (ETEP) according to the following criteria;


The artist's ability to perform live, their touring capacity and success at European festivals outside of his/her home country


These criteria were compiled by EMO in cooperation with the European Broadcasting Union, the Billboard Information Group and European festivals participating in the European Talent Exchange Program.