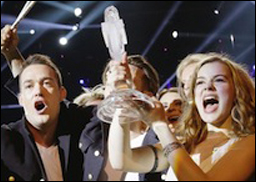 MALMO, Sweden (VIP NEWS) — Denmark has triumphed at this year's Eurovision Song Contest, held in the Swedish city of Malmo.


Emmelie de Forest, 20, had been the overwhelming favorite among the 26 entries, with her song Only Teardrops. Azerbaijan finished second.


De Forest won with 281 points and Azerbaijan's Farid Mammadov finished 47 points behind, followed by Ukraine in third and Norway in fourth.

De Forest sang her up-tempo tune barefoot, saying before she performed: "It makes me feel closer to the ground, the earth and makes me feel more relaxed."


At the post-event news conference, she told reporters: "It has been quite stressful but it's also a wonderful thing that has happened to me. It's amazing.


"It was crazy when they put the butterfly [of the winning country's flag] on the dress. I didn't understand we had won at that point."


She added: "Of course I believed in the song, but that's the exciting thing about Eurovision you don't know what's going to happen. So I was surprised and shocked when it happened."


TV viewers across Europe were treated to the mix of high-energy pop and power ballads that have become synonymous with the contest, as well as some outlandish stage performances.


One of the more eccentric acts was Romania's Cezar, who mixed his operatic voice with a disco beat. He managed a respectable 13th position.


UK entrant Tyler, 61, who is best known for her 1983 hit Total Eclipse of the Heart, had high hopes for her chances.


But the Welsh singer scored just 23 points for her performance of Believe In Me.