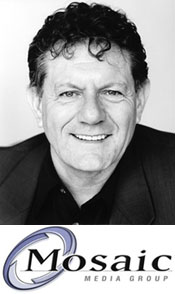 The Hamstein catalog gives Mosaic a deeper foundation in rock and country as it extends its reach in the music publishing arena. Included are all previous albums by ZZ Top (as well as any future recordings on RCA Records), whose classic songs "La Grange," "Tush," "Legs" and "Gimme All Your Lovin" propelled sales of more than 25 million albums in the U.S. alone. Country hits in the deal include 40 #1 songs performed by Clint Black, Terri Clark, Billy Dean, Little Texas, Jo Dee Messina, Tim McGraw, George Strait and Trisha Yearwood. The catalog includes songs penned by Tony Martin, Jon McElroy, Reese Wilson, Tom Shapiro, Clint Black and James Hayden Nicholas. Mosaic will look to place Hamstein songs–39 of which have received "Million Air" awards from BMI–in film, TV and commercials, as well as to explore crossover opportunities with a wide array of artists.

Conway stated, "I am absolutely thrilled to be representing this great independent catalog. Not only does it give us an additional boost, but also the increased credibility of owning a widely sought-after bevy of rock and country classics."

Allen Shapiro, president of Mosaic Media Group, stated, "The acquisition of Hamstein Music is a major addition to our ever-growing publishing division. Our team at Mosaic Music Publishing is well positioned to achieve our long-term goal of becoming one of the most exciting music publishing companies in the world."

Henry Winterstern, Managing Partner of CDP Capital Entertainment stated, "We have always been confident that our investment in Mosaic would help us identify compelling investment opportunities and realize synergies across our investment portfolio. The purchase allows us to expand and capitalize on the growth in the music publishing space, while providing yet another channel for us to leverage the production and distribution initiatives within our investment portfolio."

Pat Magnarella, partner of Mosaic and its affiliated music division, Atlas/Third Rail Management, said, "The Hamstein music catalog is one of the most eclectic and important in the music world. Not only is it a great addition to our publishing division, but it also creates new and diverse opportunities within Mosaic."

Publishing Division President Lionel Conway has a long and successful track record in the business. Having managed and co-produced the first recording of Elton John, Conway went on to sign some of the most influential artists in pop music history including Cat Stevens, U2, Tom Waits and Robert Palmer. President of Island Music until its sale to PolyGram in 1990, he subsequently served as president of PolyGram Music, launched Madonna’s Maverick Music in 1992 (where he signed Grammy winner Lucinda Williams, Vertical Horizon and other well-known artists). In 2000, after the sale of Maverick Music to Warner Chappell, Conway ran his own publishing company, representing Tom Waits and Robert Palmer.

The Hamstein Music Group was formed and has been based in Texas since its inception by Bill Ham, well-known publisher/producer/manager. In 1989, Ham developed a 10 year plan to organically grow Hamstein into a major publishing enterprise. At the core of this plan was the goal to find, develop and nourish writers and help them create great songs, then get those songs recorded by great artists. In 1999, just 10 years after launching this plan Hamstein was named by Billboard as the industry’s #2 Country Publisher and the #5 Corporate Publisher. During this evolution and growth the company has compiled an impressive roster of artists, songwriters and producers in R&B, country, rock, alternative and adult contemporary music. The Hamstein Music Group (which maintains a song marketing office in Nashville) has earned over 90 top ten singles, 40 #1 singles, more than 100 ASCAP and BMI awards, and songs featured on over 100 RIAA gold, platinum and multi-platinum albums.


The Firm Expands Into Europe


The Firm is becoming international with the opening of an office in London to be headed by Richard Griffiths, the former president of Epic Records in the United States as well as a stint with BMG in England. He will become president of international operations.

The Firm's co-founder Jeff Kwatinetz wants to replicate in Europe what his company has built in the United States with Limp Bizket, the Backstreet Boys, Linken Park, Dixie Chicks, Mary J. Blige and others. "We are committed to being a global company," he said.

The Firm also wants to expand its record division and acquire other management firms in Europe.