NASHVILLE (CelebrityAccess) Reigning ACM Female Vocalist of the Year (and the most-awarded artist in ACM history) Miranda Lambert hits the road this fall on the Roadside Bars & Pink Guitars Tour 2019 bringing with her several heavy hitters. 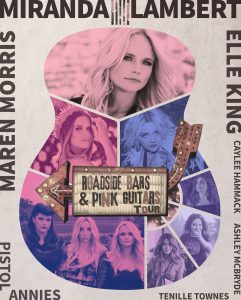 The tour kicks off Sept. 13 in Uncasville, Conn., and runs through Nov. 23 at Greensboro, N.C. The tour will feature Maren Morris or Elle King and, on various dates, Pistol Annies, Tenille Townes, Ashley McBryde and Caylee Hammack.

“I’m so excited and honored to be on tour with some of my favorite artists, who each inspire me in a different way,” shared Lambert of the all-star tour roster. “Maren Morris is a fiery fellow Texas girl that isn’t afraid to take a risk and be who she is. Elle King is a brave, confident and unapologetic artist who is honest about her life and uses it for her art. My fellow Pistol Annies are not only some of my best friends and writing partners, but also make me want to be a better artist every time we take the stage together. Tenille, Ashley and Caylee are all women who have something to say and they do it their own way. They are the next generation of fearless female artists and I’m so thrilled to share a stage with them.”

Lambert will take the stage this Sunday, April 7 to perform a medley of her hits as well as a special duet with George Strait on the CBS telecast, where she is a double nominee in the Female Artist of the Year and Music Event of the Year categories. She will also be performing at various fairs and festivals this summer in advance of the Roadside Bars & Pink Guitars Tour 2019.