(CelebrityAccess) — Kazakhstani fans of the classic Eurodance group La Bouche appear to have been victimized by imposters during a concert in the former Soviet satellite over the weekend.

The alleged concert took place on July 14th in Pavlodar City at the Central Embankment of the Irtysh River, a popular gathering spot for locals in what is considered to be the cultural heart of Northern Kazakhstan.

However, Lane McCray, the sole surviving member of the original La Bouche, who owns the rights to the group’s name, denied performing at the concert and says it was not an approved event.

Ruben Martinez, who represents La Bouche, told CelebrityAccess that he was approached last week by several parties to book La Bouche for a show in Pavlodar on July 14th but says he passed on the offers as the finances didn’t work.

But when July 14th rolled around, Martinez says he became aware that the La Bouche show appeared to have taken place anyway. Martinez says he was contacted by a colleague who happened to be in the region who reported that a “fake” La Bouche was performing in the city.

Martinez also said he was contacted by several local fans who were interested in ‘meet & greets’ with La Bouche.

“I immediately called Lane McCray, who was in the recording studio in Germany as well as our featured vocalist, Sophie Cairo, who was on vacation in Croatia and Kayo Shekoni, who was in Sweden,” Martinez said.

Martinez provided CelebrityAccess with a copy of a preliminary confirmation letter that purported to be from Tim McWilliams, who is identified in the letter as a booking director, but in reality is Senior Vice President of Talent & Touring for Live Nation.

The letter, which was on letterhead from Live Nation’s ‘Worldwide Entertainment Office’ indicated that Anita Boon (AKA Onita) and Herbert Schwamborn, also known as Metaphysic but misidentified in the letter as ‘Carlrprit’, were authorized to perform as La Bouche. 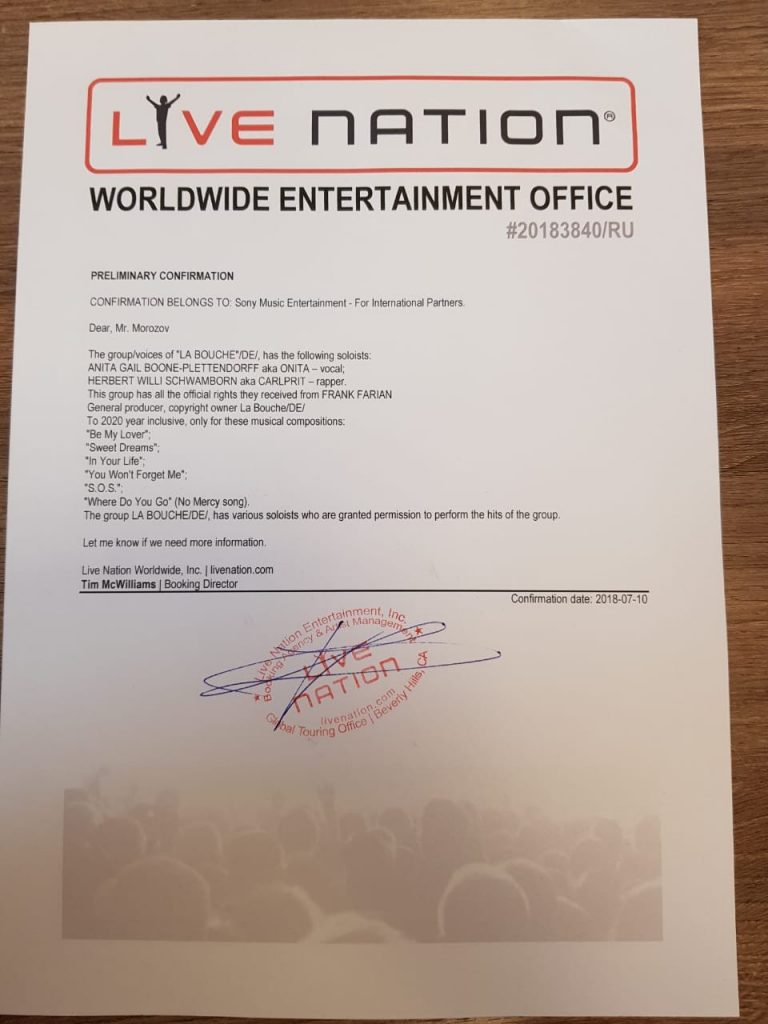 When contacted regarding the letter, McWilliams confirmed that he never sent the note and stated that the letterhead appeared to be a forgery as well.

“I am in no way affiliated with the letter: someone is using my name and representing themselves as Live Nation and I can assure you that it is all fake. The letterhead is fake, the signature is fake and sadly the answers live somewhere in Russia or Kazakhstan,” McWilliams said in an email.

Martinez also provide a copy of a letter, along with a business card from Kirill Chibisov which says the show was booked as a tribute, and that his agency has “cleared all of the rights to present the event as a La Bousche (sic) tribute” and also stipulated that they have secured work permits for Kazakhstan. 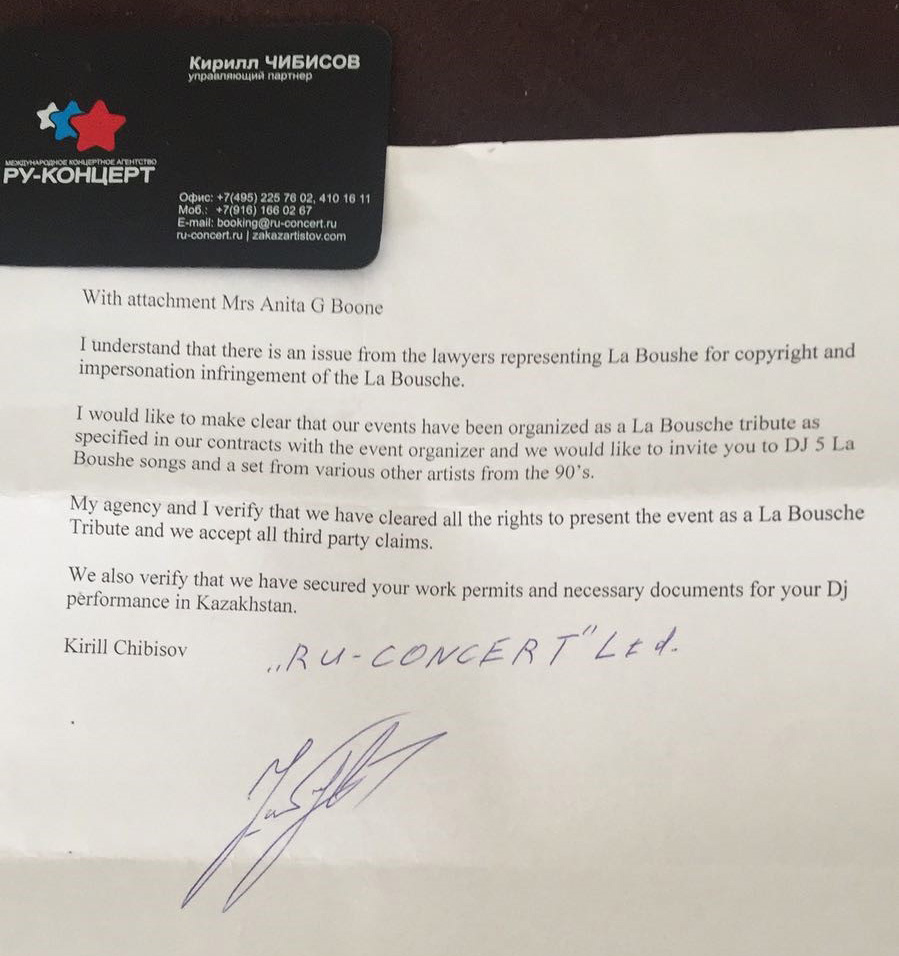 In an email to CelebrityAccess, Michael, who identified himself as an assistant director for RU Concerts, says his company had nothing to do with the show. Michael, who did not provide his last name, also made the admittedly dubious allegation that Martinez has made physical threats against his staff and suggested that the accusations about the fake show are a publicity stunt on behalf of La Bouche.

In a follow-up email, Michael added that Chibisov is not “in 2018” an employee of RU Concerts and stated that he believed the letter from him was fake. He also stated RU Concerts conducted an internal investigation which concluded that a La Bouche tribute act called “La Bush World” performed at the show. He also asserted that Kazakhstani law does not require that tribute acts seek supporting documents from trademark owners, and can freely perform without sanction.

Onita, who purportedly performed at the show, did not respond to a request for clarification from CelebrityAccess.

While it is difficult to establish for certain what happened in Pavlodar,  edits to La Bouche’s Wikipedia page seem to lend credence to Martinez’s story. On July 12th, two days before the Pavlodar City concert, a user with a Moscow-based IP address edited La Bouche’s Wikipedia page to include “In 2017, the owner and Creator of the band Frank Farian, transferred the related rights to 5 songs of La Bouche, American vocalist Onita Boone and German rapper Carlprit.”

Carlprit is the younger brother of Herbert “Metaphysic” Schwamborn.

Lane McCray, who is the only surviving member of the original La Bouche, released a video apologizing to Pavlodar City residents for the allegedly fake performance and said he hopes to be able to perform there for real.

Martinez says he is pursuing legal action against all of the parties involved in the alleged concert.