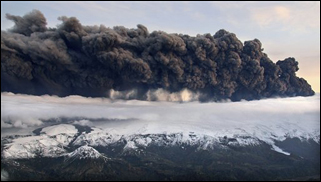 INDIO, CA (CelebrityAccess MediaWire) — A volcanic eruption on the island nation of Iceland is disrupting air travel on both sides of the Atlantic and led to numerous cancellations by European artists, including some scheduled for Coachella.

According to the Washington Post, UK Band The Cribs have been forced to scrap their Friday appearance at Coachella while the band Frightened Rabbit is on the 'doubtful' list as they look for a way to get to Indio.

A spokesman for Bad Lieutenant told Spin Magazine that the band was hoping to catch a rescheduled flight and make it in time for their Saturday Coachella appearance. Other U.K. based bands such as headliners Muse and The Gorillaz were already in the U.S.

Festival organizer Paul Tollett vibed confidence though when he assured the Wall Street Journal that the festival's headliners are all still on board. "We have 135 bands on the bill. Our headliners are fine. But there’s maybe a dozen bands in question." he said.

According to the Associated Press, airborne ash from the eruption of Eyjafjallajokull is causing the most significant air traffic interruption since the 9/11 terrorist attacks. The volcano last erupted in 1821, in a tectonic event that lasted for more than a year.

With more than 17,000 flights cancelled due to the ash plume from the eruption of Eyjafjallajokull in Iceland, a number of bands beyond Coachella have been forced to reschedule dates.

Pop performer Mika has postponed a planned show in Lisbon at Campo Pequeno after being unable to secure transportation. The show has been rescehduled to May 11th.

Los Campesinos! have pulled the plug on a planned appearance at the Culture Shock Festival in Purchase, New York. As of yet, no rescehdule date has been announced. – CelebrityAccess Staff Writers