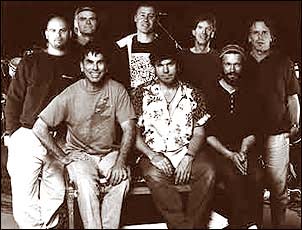 When The Other Ones takes the stage August 3-4 at Alpine Valley Music Theatre in East Troy, Wisconsin, the "Terrapin Station–A Grateful Dead Family Reunion" will test its fans to see if more shows will be booked. The last time The Grateful Dead performed at the venue in 1989, there was a huge overcrowding problem.

This performance will mark the first time that the four surviving Dead members have performed together since Jerry Garcia's death in 1995. All four have their own groups, and each solo "tribe" will also be performing: Bob Weir's Ratdog, Bill Kreutzmann's TriChromes, Mickey Hart's Bende Orchisa and Phil Lesh's Phil Lesh & Friends.

Tickets sold out incredibly fast for this event, somewhere between 60,000-70,000 ducats. Clear Channel Entertainment had to post a $100,000 bond to cover the cost of additional security for the on-again, off-again concert to be approved by Walworth County officials.

If all goes well, there well might be more The Other Ones concerts. However, the members of the band and CCE officials have asked fans without tickets to stay away from the concert site.

"Depending on how things go," The Other Ones' spokesperson Dennis McNally told the Los Angeles Times, "there's a possibility of additional shows, lots of them. I can't confirm any specifics after August 4, but I can confirm that's what is utterly critical for anyone who considers themselves Deadheads: If you don't have a ticket, you simply can't come. You won't get within a mile of the facility without a ticket in your hand. That's the promise we had to make. If you do show up without a ticket, you're a saboteur, and you're putting at risk our 30 years as a respecting community."

NEW YORK (AP) — Despite the humidity and 90-degree heat, Barry Manilow's fans decided they couldn't smile without him, and flocked to Bryant Park in midtown Manhattan to see him perform Tuesday.

Manilow sang a few of his classics, including "Can't Smile Without You," for about 2,000 people at an outdoor concert that's scheduled to air Friday on ABC's "Good Morning America."

He also did parts of "Mandy" and "Could It Be Magic," as well as the commercial jingles he wrote for State Farm, Band-Aid and McDonald's.

The 56-year-old Brooklyn native, dressed in a black jacket and black pants, fanned himself backstage before opening the show with "New York City Rhythm."

"This is above and beyond the call of duty," he told fans, many of whom held up handmade posters and Manilow albums. "My Jewish guilt is kicking in, having these people stand in the sun."

The symphony has been plagued by management and financial troubles and in June symphony officials decided to shut down the 123-year-old orchestra, leaving San Jose as the largest U.S. city without a symphony orchestra.

The symphony has debts of more than $3 million and its only assets are its sheet music, acoustic shell and office equipment, which even by liberal estimates are only worth $300,000.

Even as the fortunes of Silicon Valley entrepreneurs soared, the symphony saw subscriptions and attendance decline over the past decade. It struggled for years to keep expenses down and raise money.

The bankruptcy filing will let symphony management create a proposal for payment of creditors and continue to manage its assets. Those assets would then be used to form a new symphony.

Symphony interim chairman Jay Harris said a new orchestra won't start up until it has at least funding for one year, a reserve for three to six months and a substantial endowment.

The symphony's musicians have been paid back wages, but they are now unemployed.

Lord of the Dance Kicks Off Second Leg September 3

Michael Flatley's Lord of the Dance, that has broken box office records in more
than 30 countries,
is returning to North America for the second leg of its national tour. Starting
September 3 in Hartford, CT, the tour will visit 32 cities and end on December 15 in
Champaign, IL. In less than
five years, the show has brought 50 million people worldwide to their feet at
sold out theaters,
arenas and stadiums. Flatley, who originated the role of the Lord, serves as the
artistic
director and continues to oversee all aspects of the production. He is the first
American to win the
All-World Championship in Irish Dance, and opened the show in Dublin in
1996.

"Our goal is to take the audience on a wondrous adventure that will ignite its
minds and souls," said Flatley. "We've combined traditional and modern forms of
dance to create a high octane blend of soulful beats and
feet that move too fast to comprehend."

Flatley is listed by The Guinness Book of World Records for having "the world's
fastest feet" at 35 taps per second.

The Lord of the Dance troupe comprises Irish dance champions from around
the world.

"Our first leg of the tour was a huge success," said Lee Marshall, president of
Magic Arts & Entertainment, the tour's promoter and a veteran of many
entertainment events. "This show combines so many
different elements — drama, music and unforgettable dance numbers which
makes it such a crowd
pleaser."

Magic Arts & Entertainment, one of the leading tour producing companies in the
U.S., is also currently producing "Grease" starring Frankie Avalon and "The Magic
of David Copperfield." As former owner and president of Magicworks
Entertainment, Marshall
produced and promoted some of the world's most successful concerts,
theatricals and family
shows.

Lord Of The Dance–2002 domestic Itinerary

November 20 Evansville, IN The Centre


Burger King Corporation is sponsoring six outdoor concerts in New York City, as
part of the CBS Summer Concert Series. The first concert, performed on July 12
at the General Motors Plaza in New York City,
featured Chicago; Bonnie Raitt performed July 24. Also scheduled are "Monica"
on July 30; Train, the week of August 15; and the Dixie Chicks, who close out the
series, on Aug. 30. The sixth concert is expected to be confirmed shortly. The
concerts, which are free to attend, are taped and
then broadcast at a later date on the "CBS Early Show."

"Music is a universal language and has an unbelievable ability to bring people
together in a
wonderful way," said Charlie Pacunas, vice president, global media and alliances
for Burger
King Corporation.
"In addition to bringing some of the best musicians of our day to the people of
New York as
well as the rest of the U.S., we have also negotiated a strong media buy that
reaches our customers in a relevant way," Pacunas added.

Following Ozzfest's July 28 show in Atlanta, headliner Ozzy Osbourne will take a three-week break from the tour to be with his wife/manager Sharon, while she undergoes her first course of chemotherapy treatments for cancer, reports his Web site. System Of A Down will move into the headlining slot on the main stage, during Osbourne's time away from the tour, August 3-20. He is expected to return for Ozzfest's August 22 show in Denver at the Pepsi Center.

"This has been one of the hardest decisions I've had to make and I'm hoping that my fans will understand," said Ozzy. "Ozzfest must continue with or without me since it's Sharon's baby. I want to thank all the bands on Ozzfest and my crew for all their love and support, especially System Of A Down."

On the dates that Ozzy is not performing, Sharon has arranged for all fans attending Ozzfest 2002 to receive a free special treat from the food concessions at each show.

KACI, the latest entry in the pop teen genre, kicks off a 10-date, nationwide Pepsi-sponsored mall tour on July 27 in support of her debut album I'm Not Anybody's Girl (Curb). The tour ends August 31.

CHEYENNE, Wyo. (AP) — Kenny Chesney broke the Beach Boys attendance record over the weekend when he played in the evening at the "Frontier Days and Rodeo."

Chesney says it took him a minute "to get his head around" the fact that he'd brought in the biggest crowds for Frontier Days, because he'd always heard about the 106-year-old event when he was growing up.