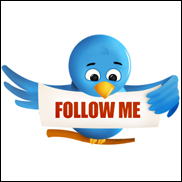 
That's what it's based on. Maybe only personal fame, your friends and family, but in a cacophonous world, we only want the tweets of those we know and care about.


Let me be clear here. I'm not speaking about Twitter power users. Power users use Twitter as an overall information platform, searching for breaking news utilizing hash signs and search functions. It is possible that the general public will embrace this way of acquiring up to date information, but your goal now is to further bond people to you, so start with the basics.


Your personality. First and foremost. If your identity does not come through, you're not doing it right. Sure, stating an opinion might subject you to abuse, but welcome to the Web, where too many powerful people used to having their asses kissed are confronted with criticism for the first time and hate it.


And speaking of hate… There are pure haters out there. If you're getting no negative feedback, you're not doing it right. The key isn't to take the edges off your tweets, but to build up your armor to the point where the negativity doesn't penetrate.


Maybe it references your location, your birth place, your career, but assume that people already know a lot about you. Hit the ground running. Twitter is for fans, not casual listeners. It's the opposite of terrestrial radio. If people don't feel like insiders reading your tweets, you're doing it wrong.


Both personal and informational. What you're doing is cool. But if you're tweeting the mundane, you'd better be truly famous, worthy of TMZ coverage. Otherwise, put a hook in it. You went to your fave diner and suddenly it sucks. You're at the beach and the visuals are mindblowing. You're eating Chunky Monkey at Ben & Jerry's (illustrating your favorite flavor.) It's the opposite of traditional corporate music marketing. Instead of "Hello Cleveland", it's the Motel 6 next to the venue SUCKS and where can I get a good western omelette!


If you really want to know something, nothing is better than Twitter. But don't ask if you don't want to know. Where can I get a great hamburger here, the lock switch on my iPod is stuck, how do I fix it, has anybody seen this movie and is it any good?


People want to be your friend. Treat them as friends. If you ask a friend a question and then ignore him, he's pissed.


If you're in the studio, tell a story about it. Or sent a twitpic. Especially if it concerns something funny or someone famous.


Every day is more important than ten tweets in a row and then none for a week. Don't see tweeting as an obligation, do it upon inspiration. Some people love to tweet, that's fine, tweet away. But don't feel guilty if you suddenly have nothing to say. But don't self-edit to the point where you say nothing.


Who is this person in the credits? Let your followers know.


This is the number one way to bond Twitter followers to you. Not only do you look good to other followers, the person whose problem you solved will tell anybody and everybody how great you are. If someone got screwed, say you'll get right on it. And then have your manager or another team member address it instantly. Yes, speed is of the essence. These are your fans, don't make them wait, the same way you'd never arrive late for a hot date.


Stop hemming and hawing, stop debating the inevitable march of the future, stop lumping Twitter in with MySpace and Facebook, stop making excuses why you can't play.


You're afraid to play. Yup, that's the truth. You're afraid of looking like an idiot, like you're not hip, like you're boring. But if you start on Twitter, you'll get the hang of it very quickly. And you'll begin experimenting, finding what works for you.


Then a lull occurs. Why am I doing this again? How come my follower number is not increasing exponentially?


Maybe you'll stop for a week.


But continue to play.


It's a new world. Don't see this as direct to dividend. See it as a living, breathing procedure. Kind of like making music. Twitter should not be calculated, but an adventure.


And it does pay dividends. Both career-wise and emotionally.


Not everybody wants to follow you, but your fans are dying to. Because fans want more. And the more you reveal, the more unique you are, the less corporate bland you are, the more people will follow you and feel good about you.