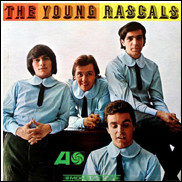 
You buy these records and you never hear your favorites live, especially today, when bands are afraid to play their deep cuts, for fear of boring their audience, especially if aged.


Yes, that's what we are, we baby boomers. Old. We try to deny it. Act like hipsters. But it's the aches and pains and the cancer and looming funerals that tells us otherwise. The most amazing thing about the Rascals in concert is that they're all there, all these years later, nearly fifty.


To say they were huge would be an understatement. They were the biggest band on the east coast, and that's what they were, a band. And this is the revelation when you see them live, that they're playing all the instruments, it reminds you of nothing so much as your own history in the basement, playing your own instrument you were driven to pick up after seeing the Beatles on Ed Sullivan in newly-formed bands that played all the hits but rarely played live, not that you were unhappy about this.

Yes, instead of tweeting, instead of writing apps, we played music. And sure, some people dreamed of becoming famous, but most of us knew it was not in the cards, we were thrilled just to participate, to pick out the notes, to be as close to the music as possible.


And those of us who were truly bitten by the bug gave up on singles early, we were album people, and that's how I know "Sueno," it's on the "Groovin'" album.


The intro was played by Gene, on an acoustic, with no help from hard drives, the band fell into the groove and Felix began singing this Spanish-styled number and I truly started to tingle, just like the line in the song.

Here I am, decades later, but I'm jetted right back to 1967, playing these records over and over again because that's all we had. No YouTube, no Spotify, no satellite radio and only a handful of TV stations. We were all addicted. It was not like today. The hits were not everything, it was about the bands. And they didn't come and go in a weekend, but lasted for years. Like the Rascals.


He was Ginger Baker before Ginger Baker. He twirled the sticks around his ears and we tried to replicate it and never could but it was more than artifice, Dino could PLAY!


And on the big screen he tells the story of pursuing his craft in the city, otherwise known as New York. Not only the rockers, but the jazzers too, he loved Miles Davis and Buddy Rich back when you didn't only like one kind of music.


And he was just as good last night. Sure, he was wearing a headscarf, but he was still lean and active, in touch with the other players, driving the music forward. It was worth the price of the admission just to watch him.


I saw him on 48th Street, where you went to buy musical instruments at a discount. The most famous place was Manny's, which was completely unlike Guitar Center. There was no warmth, no ability to take your time and play, certainly if you were not gonna buy. Did you want it? They called back to bring it up to the front of the store and you were on the sidewalk with your purchase before you knew what happened.


But it was next door, maybe at Sam Ash, where you walked a few steps down. Gene was there with his hair curling up at the back, standing by his Acoustic amp. That's what he used. We knew. Every model Fender amp. If you played something else, we paid attention.


And not long after the Rascals broke, it was the era of the guitar hero. And today we've got people who can play real fast but sans soul and style. But this was not and is not Gene. A nearly seventy year old is supposed to mug, take attention away from his playing, but Gene delivered.

Yup, just Gene, Dino and Felix, that's what the band was. With Felix playing the bass notes on the organ pedals. And there wasn't much more last night, oh, a trio of backup singers, and a bass player and another keyboard player, but most of the old bands go out with a plethora of players, it's all fake, they're trying to be who they once were even though we're all older, it's creepy. But the Rascals were still a band. You could envision the Barge, a small space overwhelmed with this sound, forcing you to get up and dance.


That's what we did. Spun our records. And then went to dark spaces where we bumped into each other as live music pounded our ears and bodies, we were left with an exuberant feeling every boomer knows by heart.


I AIN'T GONNA EAT OUT MY HEART ANYMORE


Eddie was the frontman, the cute one, the ones playing the home game wanted to be.


And it all started with this track.


So I'm skiing at Stratton on the last day of the season 1967, it's the second weekend of April and it dumped nine inches the night before and me and my buddy Keith are glomming through the Maypo and suddenly I hear…


I looked up. There were only two people on the chairlift. Girls. Our age.


They couldn't be talking to us…but there was nobody else on the slope!


So we're skiing together all weekend, my older sister's male buds are agog, and while we're riding up the lift, we're singing songs to each other.

And the following Christmas, when Steph and I reunited at Bromley, we're riding the J-bar and about a hundred fifty feet up she looks over her shoulder at me and says, REMEMBER THIS?


And she starts singing "I Ain't Gonna Eat Out My Heart Anymore."


I'm possessive of my records. Don't touch 'em, don't put on any fingerprints.


So I was absolutely mortified to come home after my older sister's eighth grade graduation party to find the basement strewn with my albums.


But before I could express my displeasure, Jill's face lit up and she said I DIDN'T KNOW YOU HAD COLLECTIONS!


The follow-up to "I Ain't Gonna Eat Out My Heart Anymore" and a sixties staple.


And unlike their children, boomers prefer to sit, but once they heard the count-off, everybody in the joint jumped to their feet and started boogieing.


That's the power of music.


Quite possibly the biggest greatest hits album of the sixties. If a house didn't have it, the inhabitants already owned every Rascals album. There was nowhere I went where I didn't find it. Like at Colleen's house. The first girl I felt up.


You never forget it.


Most people think it's a Pat Benatar record.


What do they say, all the money's in publishing?

I'VE BEEN LONELY TOO LONG


Sometimes you're too young to get it, it wasn't until after my wife moved out that this record truly made sense. A Felix Cavaliere tour-de-force, the horn accent in the verse is so unexpected yet so right the only thing I can compare it to is the harp in the Beach Boys' "Catch A Wave."


HOW CAN I BE SURE


The question of the ages. And it's not only about love. It's about all commitments from which you cannot turn back. What are you gonna do?

Put on a record and wait for the answer to reveal itself.


The sixties were different. Despite all the protests and assassinations, it was an era of optimism. The Beatles implored us to love one another and we listened. Income inequality was something unheard of, no one we knew was rich, we were all in it together, waiting to get our driver's license so we could tool around in our dad's station wagon.


"Groovin'" and Sly's "Hot Fun In The Summertime." Listen to them if you want to know what it was like. There was no underbelly of angst, as there is in the recordings of the rappers. There's just sheer unmitigated joy.


And that's what we felt, listening to the music emanating from the dashboard speaker with the windows down back before everybody had air conditioning.

That's what we were all trying to do. And until we did, the bands were placeholders, we invested all our hopes, dreams and love in them.


Another album track I felt I'd never hear live again in my lifetime that Gene pulled the stinging guitar part out of like it was still 1968.


PEOPLE GOT TO BE FREE


To practice their religion.


To play their music loud.


This is what we were fighting so hard for in the sixties. We believed when we finally got power, the world would be a better place. But in the eighties every baby boomer stopped loving his brother and only worried about himself. And now we've got the governor of the Rascals' home state of New Jersey professing to love the Boss, but unlike his mentor, not putting the people first.


Speaking of the Boss… Credit Steve Van Zandt for making this show happen. He not only reunited the Rascals, he raised money on Kickstarter for production, which is brilliantly executed by Marc Brickman.


But it really comes down to the music.


Once upon a time you needed to know how to both play and sing. The Rascals had this nailed.


But if you wanted to be a superstar, you had to write.


And that's where Felix Cavaliere comes in. He loved covers, but he implored the band to write its own material. Who knew he and Eddie Brigati could write standards!


That's what the songs of the Rascals are. Whether sung soulfully by Felix or mellifluously by Eddie, they were truly the soundtrack of our life. Back when you played music for the joy more than the money, when everybody knew the Top Ten, when everybody grew their hair long and let their freak flag fly. The Rascals cast aside their schoolboy outfits and grew beards, wore their street clothes on stage, it was the opposite of today, when as soon as you make it you hire a stylist and a choreographer.


But back then dancing was something we did involuntarily, inspired by the music.