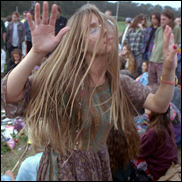 I went to see the Grateful Dead exhibit at the New York Historical Society. Thank God I slept late. Turns out they don't open until noon. Finally, a rock and roll museum show!

Not that I'd recommend it. You see there's very little there. It's kind of like going to Carvel and getting only a dollop, going to In-N-Out and getting a cheeseburger or going to Mrs. Fields and getting half a cookie. We want the complete ice cream cone, shots and all, a Double Double, enough cookies to fly high above the astral plane on the sugar buzz. And that's what the Grateful Dead delivered. It wasn't a concert, but an experience. They played for hours.

And most people didn't care.

Actually, very few people cared at all for a very long time. The Dead were famous for playing for free, not only because they believed in the cause, but for the exposure. The best way to convert new Deadheads was to get them to a show. One can argue the Dead didn't make a decent studio album after 1970's "American Beauty", but their live show grew their audience. Slowly. Steadily. And now we've got all the pundits saying to do it like the Dead. Well, exactly how did the Dead do it?

Not through hit songs. By time "Touch Of Grey" finally made it to MTV in the eighties, the band had been at it for more than two decades and was already established as a monster touring attraction. The music was important. But it wasn't enough. What made the Dead an institution was community. The audience felt like they belonged. They felt bonded both to the act and their fellow fans. The Dead weren't interested in everybody, just those who cared. And this is much different from today. When the goal of every band is world domination. Quickly. Accompanied by bags of money.

It took the Dead years to even make an appealing record. Their first three albums were stiffs. Completely. They only got a bit of traction upon the release of "Live/Dead" in '69. It was the first Dead album that was truly listenable. Then came the dynamic duo of "Workingman's Dead" and "American Beauty", a one eighty in sound, and suddenly the alchemy took hold. Fans of the records went to see the fully-developed show and were hooked. And took their buddies. All in search of a good time.

That's what the music represented. Get high, lay back for a few hours and let's see if we can lift the roof off this joint. You're not waiting for the hit. You're not amazed by the pyrotechnics. But if the band stands on stage playing long enough, we're all gonna fall into a groove, you'll feel it and be transported.

Not that it always went down that way. There could be hours of lousy music. But the band was trying. To create something new and different each and every night. Miss a show, and you missed a once in a lifetime experience. So, you had to go. Just in case. And while you were there, you met Bobby and Sue, Sally and Dave, like-minded people from all over the country, who too were in search of the elusive experience. One that only the Dead could deliver. Especially as years went by and music became slick and expensive, when the money was everything.

And speaking of money, there was a ticket stub from 1994 with a printed price of $25. I don't care how many years have gone by since, there's no way you get to the ticket prices of today. When the promoter and the act are adversaries, when the promoter is a public company and no gig is a transcendent event, just another blip on the cavalcade of revenue producing dates. Bill Graham might have been tough, but the band respected him, was in business with him. Today, the goal is to rip off Live Nation. To be overpaid by AEG. And if the fan is screwed in the process, well, you can't sell a record anymore, it's got to be this way.

But the Dead could never sell a record. They weren't even stars by today's anemic sales standards. Sure, eventually some of those albums went gold, "American Beauty" even platinum. But it took years and years. Then again, create something desirable and you can sell it for years. Is anybody going to want "Poker Face" down the line? If you believe so, you've drunk too much kool-aid, and not the kind Ken Kesey was spooning out.

So, you've got to ask yourself, are you selling singles, hits, or a whole oeuvre of music?

The Dead weren't selling hits. They seemed unable to write one. And it wasn't about the album. So don't give me any mishegas about preserving the long form. But it was more than a track. You couldn't distill them down to one three minute song no matter how hard you tried. How to square "Uncle John's Band" with "Dark Star"? Impossible. Which is why when someone tells you to settle on one sound and stay there you should scratch your head. Might be easier to sell at first, but down the line, your one-dimensional sound lands you on oldies radio at best, maybe you can play the lounge at the casino, whereas the Dead ended up filling stadiums!


The free music, the tape trading? That's been overstated. Most Dead fans had never heard a live cassette. But those circulating cassettes did so with such fervor that the legend spread. So if you think the way to emulate the Dead is to give your music away, you're missing the point, that's one tiny element.

But, that doesn't mean you don't have to give something away. The Dead did this regularly. Their fan club was free. You got sample discs, newsletters and the ability to buy tickets. In other words, every transaction was not a revenue generating event. This was about music and life more than money. And, as a result, the band's fans thought the performers had their best interests at heart, and responded by not only buying tickets, but creating comics, homemade merch and endless artwork. This is how they evidenced their belief. So strange in an era where rights holders clamp down on any innovative behavior by fans. Don't remix my music, don't do anything unauthorized. Maybe I'll have a contest, with strict parameters, but it's all got to be controlled.

The Dead were out of control. They were on an adventure without a destination. Sometimes leading their fans, sometimes being led by their audience. They solicited feedback. They didn't know exactly what they were doing. No artist really does. You can't plan art, you can only start.

Traipsing through the exhibit, one was struck not so much by what a long strange trip it was, but that it was over, that what the Dead represented is now long gone. The Dead were the precursor to Silicon Valley. We used to need to get a new computer, we knew all the specs, now they're sold at Best Buy for cheap and most people don't care what's inside. It's a mature industry.

And music is positively over the hill.

First and foremost, everybody wants to get paid. Not only the labels, but the songwriters and performers. They want the cash right away, not realizing that the heyday of the late twentieth century might be just that, a heyday, that's gone, never to return.

Music is free and concerts are events you attend infrequently, hell, who could afford to go once a month, like we used to?


How successful would ecstasy be at $125 a hit. Imagine if a puff of marijuana cost $75. You'd still want to get high. But it would be a rare event, and you'd expect to see skyrockets, you'd expect to have the time of your life. Ergo all the dancing and pyrotechnics on today's stages. Because if you pay that amount of money for a ticket and the show's not stupendous, you're beyond disappointed, you feel ripped off! And you're not eager to go again.

So blame Universal. And Live Nation. And the acts. But blame yourself too. Because you no longer want to take a chance, you no longer want to risk going to a less than stellar show. And when you go, you want something akin to "Avatar", all special effects with a lame story. Whereas, when done right, music is enough. Doesn't matter how the performers look, doesn't matter if they're playing in front of a black curtain, if they're in the groove, it's transcendent. But how transcendent can it be if the show's on hard drive, if it's the same every night? That's a movie, not music.

So, as you can see, we're screwed. Everybody's paying lip service to a bygone era, but not emulating it. Bands are not willing to follow their own direction, starving until their audience finds them, getting so good that they can't be denied. And an audience brought up on music videos wants the show to be just like the clips, or they're pissed. Hell, the Dead couldn't play the same song the same way the following night, never mind a hundred nights straight!


The Dead never had their victory lap, no cover of "Newsweek" and appearance on the "Today Show", no acknowledgement by the mainstream. Because they weren't made for everybody. Just for a small coterie. But in America, a small coterie can keep you humming along quite well, throwing off a ton of cash, keeping everybody in smiles.

One of the signature Dead moments was a cover tune, in its most famous incarnation, segued into from Buddy Holly's "Not Fade Away".

In between, it wasn't sure where the band was going, but then you realized they were headed down that road feelin' bad.


If you're not willing to go down that road feeling bad, you're not a believer in rock and roll. The artist has to be able to keep his eyes open as he drives to the next gig, possibly a thousand miles away. The fan has to wake up hungover and go to work. And the label has to be willing to throw its hands in the air and realize that it may never get its money back.

But everybody had a very good time. An extremely good time. Such a good time, that they want to do it again. The act wants to play more gigs, the label wants to make more records and the fan wants to go to more shows. All in pursuit of that peak experience, unique, unavailable anywhere else.

Imagine if every love affair were identical. That you went to the brothel and overpaid to get your rocks off. That's today's music business. You come, but you're not satisfied. And believe me, one thing Grateful Dead fans were was satisfied. They felt by pursuing their interest in the San Francisco band they'd be rewarded in a way they were not in work. They might even acquire a love interest. And the music would inspire them and keep them warm at night.