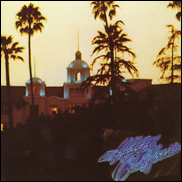 You might not understand it. You might be well-adjusted, you might fit in, you might be happy where you are. But some of us need a fresh start. We need to leave, move on, to a place where we can be accepted on our own terms, where we can reinvent ourselves, live the life in our heads, the one in the Beach Boys songs.

At this late date, California even has natives. But they're unlike the denizens of New York. They've got no need to say L.A. is the best, that nothing compares. But they don't want to live anywhere else. Because of the lifestyle. Sure, the weather's great, but where else can you live where no one else is in your business, where you can strive to be everything you want to be?

This is the California Dream.

And we're all dreamers.

Glenn Frey's a dreamer. Don Henley and Joe Walsh too. From Michigan, Texas and New Jersey respectively. They all came to L.A. To express themselves, to make it.

And making it used to be so different. The best and the brightest went into music. A world where victory meant you were beholden to no one, where you got all the women you could handle and had more than enough money to pay for drugs and the whims of your imagination.

They call those people bankers today. Wall Streeters have the money. Sure, an athlete can make twenty mil a year for a while, but then he flames out. A musician? He's making bupkes in comparison. And then there's Steve Jobs and Mark Zuckerberg, the Google twins. They're the rock stars of today. On sheer wit not only are their enterprises raining coin, they're in each and every one of our homes, they permeate our lifestyle. Steve Jobs says the iPad is the next big thing and everybody checks it out. We use Google multiple times a day. And Facebook is the new FM radio, a place where the like-minded congregate.

Yes, that used to be our clubhouse. The FM dial. Everywhere we went, there was a station just for us. But us was each and every baby boomer. You can't find a boomer who doesn't know "Hotel California". May hate it, just like people pooh-pooh the iPad, but there's not a boomer alive who hasn't heard it. Whereas a large part of the population hasn't even heard today's Top Ten. And those making music

are sold out whores, tying in with corporations to get their vapid message across. And what exactly is the Black Eyed Peas' message? That they know how to make money? You've got a feeling that you want to touch her humps, her lady lumps…welcome to the parade, you're adding no insight into humanity, this is Life 101.

But it used to be different. We used to listen to what the acts had to say. We wanted the insight in addition to feeling good. The deejays were our best friends. We went to the gig to commune with our brethren. And the music played…it was ubiquitous, everywhere you went in the summer of '72 you heard "Take It Easy". "One Of These Nights" in the summer of '75. And the winter of '77 was filled with "Hotel California". And in between them was a plethora of hits, to the point where the Eagles don't have to dance, no production numbers are necessary, the music is more than enough.


And we in SoCal go. Because when we hear "The Boys Of Summer" we picture PCH, we visualize the sun setting on the beach, we know elation and despair. And we know how to keep on keepin' on.


And we don't care what anybody else thinks. We've got our own culture. Where the Eagles are equivalent to Shakespeare, the bards of our life in the fast lane culture.


So, halfway through the "Long Run" Solters taps me on the shoulder. Are we ready to come backstage? After nodding in agreement, he puts us on hold while he retrieves two more members of the posse, Cameron Crowe and Neal Preston. And after showing our credentials to the gestapo, we're in the inner sanctum. And when Irving performs the introductions, I'm stunned to find out that Cameron and Neal know who I am. But it gets better, because Cameron starts testifying about what I wrote about "Stop Draggin' My Heart Around", telling me I nailed the essence of being a reluctant male and how he forwarded it to a fellow director and while I'm contemplating how to respond, who comes by, but Neil Diamond, who pronounces the Eagles' harmonies the best since the Everly Brothers before exiting, since he has to vocalize the following night and I'm standing there thinking it might as well be 1975.

"Fast Times" and we all feel like veterans of a war. But we're still here. A little thicker, with a little less hair, but with our sense of humor still intact.


LONG ROAD OUT OF EDEN


It got the anticipatory applause, you know, when the riff is played, long before the chorus, people purchased the double album and listened to it. Still, "Long Road Out Of Eden" is not "Hotel California", it's had no cultural impact, not because it's deficient, but because we live in a different world, where music no longer dominates and neither does the left.


Everybody in this business is waiting for the seventies to return. Or at least the eighties, when MTV ruled. Bring back the days when 'N Sync sold two million albums in a week, when Boston's debut sold far in excess of ten million copies and there wasn't a soul under twenty who didn't know Boy George. Today's youngsters want the fruits, they want the fame and the attendant riches. But you listen to the Eagles perform hit after hit and you realize how hard the work was, how long and strange the trip. Journeying to L.A., backing up Ronstadt, playing in go-nowhere bands, living in the shadow of the Bowl, operating on your wits. Climbing the mountain instead of looking for a helicopter to deposit you on top, hell, there were no helicopters.


But there was a mountain. One we all knew and paid attention to. Now we're living in the Himalayas, gigantic peaks all around, to the point where even the new Eagles album is niche.


Welcome to the twenty first century. Where kids think stardom is fame and graybeards remember when dinosaurs walked the earth, when James Brown was called in to quell riots. That was the power of music. And it was about the music. The rest was just trappings. But now, all we've got are the trappings.


Maybe they could get "Long Road Out Of Eden" in a movie. Ah, who am I kidding. "Hurt Locker" wins the Oscar and still no one sees it. We see Snooki and Kim Kardashian. More people know who Rachel Uchitel is than have heard "Long Road Out Of Eden". So, it's frustrating to be an artist. Your canvas is large, but the gallery is small. You can go on tour to beaucoup bucks, playing for people who want to relive their memories, still…you remember when what you were doing made a difference.

And so does the audience.


Sober Joe does turn out to be the linchpin, ripping off the notes that turn the music into rock and roll, and singing his own hits. But what made this number so great was the vintage footage on the big screen behind.


Everybody's got a camera today, everybody makes movies. Your life is documented from birth to death. But in the seventies making a movie was an enterprise that required money, time and skill, no Flip cameras were extant. So, watching the footage on the big screen was like looking into Tutankhamen's tomb. Relics! Rock stars on parade. Living the lives of stars, in an era when musicians were at the pinnacle of the food chain, when there was no more powerful position. In an era when YOU told the record company what to do.


"Desperado, why don't you come to your senses"


You've been out ridin' fences for so long now"


We spent the sixties exploring the world, protesting inequities.


In the seventies we licked our wounds and looked inward.


And in the eighties, we sold out. Became our own worst enemy. It was fine to have children, but did we have to rape and pillage financially, did we have to drive SUVs, did we have to be so mine for me? But everybody else was doing it, so maybe we should too.


And it's only gotten worse. Why not license your music for that commercial? I've got to get bigger, I've got to eat. Everybody else is doing it.


But isn't it funny the music everybody wants to hear predates this era? Comes from a time when the music was enough, when it was pure and inviolate?

That's why the classic rock acts can still do boffo at the b.o. and so-called stars of yesterday, and I truly mean yesterday, are working day jobs. Because music is no longer soul food, but fast food, made for the here and now, to be denigrated and forgotten.


Some folks can't hold out that long


But nobody wants to go home now


There's too much goin' on"


Today there's truly too much going on, but so much of it is noise. It's like we're living in a Brillo pad, being scratched by stuff we don't care about, looking for clear light. That's what music was, clear light.


And the music was enough. The Eagles can play for nearly three hours and no song is unknown, there's no bathroom break. Because that's the way it was. You paid your dues in pursuit of the pulpit, and then you could preach in churches and synagogues around the world, to this day.


We bought the records to keep us alive at night and then went to the gig to ogle the opposite sex, clap our hands and sing along at the top of our lungs.

Last night we took it to the limit one more time. In the only way we know how. We prayed at the Hollywood Bowl. Hoping a day will come when musicians lead us once again, doubting it will happen, but enjoying ourselves in the meantime.


"There are stars in the southern sky


And if ever you decide


There is a taste of time sweetened honey


Down the seven bridges road"


It rained all afternoon. By showtime, it was fifty degrees. What kind of crazy screwed up world do we live in where an outdoor concert is scheduled for April?


Southern California. Where it occasionally does rain, but optimism reigns, where water was brought from the mountains and images were manipulated and then projected around the world as reality.


But as powerful as movies can be, they're no match for music. You watch movies, music penetrates your soul.


The Eagles were both sunny and dark, purely human, three-dimensional troubadours commenting on the lifestyle we were living or in pursuit of. Maybe you've got to come to California to understand it, maybe you can close your eyes and visualize it. But last night, we lived it.