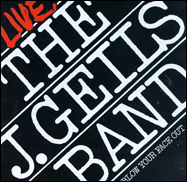 If you know where to surf on the Web, you can find downloadable concerts.

I was surfing my usual sites and I found a live recording of the J. Geils Band from April 25th in Detroit this year. This I had to check out.

I downloaded the cuts from the Who’s 1969 fall tour first. Then I took all twenty four live cuts here. From the second show that evening. Which, according to the blurb, sold out in fifteen minutes.

Is this true? Who knows, Detroit was always a rockin’ town, a big J. Geils market, and there’s no label hype. Meanwhile, who even knew that J. Geils was on tour?

If you Google, you find a band site that hasn’t been updated in a decade. Literally.

Search a bit farther, and you can see they’re playing a casino on New Year’s Eve. They opened a new House of Blues in Boston earlier in the year. Funny how time makes those memories fade away. Of how you hated each other, of how you disagreed. But the good memories, the good times, they remain. When it was all about the music. Before money fucked the whole thing up.

Now I know the big thing on Hollywood Boulevard these days is clubs. You overpay for drinks to bump asses to records. Huh? What would happen if the assembled multitude saw a great live band?

Used to be about the records. You needed an album and hopefully a hit single in order to make it. But if you’ve got a killer live show today, would that be enough?

The energy is enough.

This is the opposite of canned music. This is pure power, pure sweat. This is the kind of event you drag your friends to. It’s just that prior to the Internet, it was hard to spread the word. You had to rely on in-person conversation, the telephone, but today you can testify online and ZILLIONS can hear you. And we’re all looking for something great. And when we find it, we tell everyone we know.

In other words, does the hit single NO LONGER MATTER?

Let’s be clear. A hit pays dividends. But it won’t get hardly anybody to come see you live. Even if you’ve got a string of them, people don’t consider Top Forty artists to be credible. Which is why you’re better off with one Michael Buble than anybody in the Top Ten. People go to see Buble to hear a crooner. He’s nailed this market. How about R&B? Do you think it can’t be replicated?

You can’t get players who know more about technology than music. You’ve got to find people who live to listen, who don’t know html, but can transpose keys on their instruments on the fly. People who know the history of music, not the history of Apple products. Oh, there’s nothing wrong with bleeding in a bit of technological know-how, it’s just that if this is done right, IT SELLS ITSELF, THE MUSIC COMES FIRST!

People want to get closer. A beautiful girl doesn’t have to advertise. Boys flock around her. She may be an airhead, there may be little substance, but true greatness draws people in. And R&B is a proven genre. Mix it in with a bit of rock and roll, and you’ve got the J. Geils Band.

If J. Geils were starting today, they’d be monstrous. Word would spread from campus to campus. Their live business would be amazing. And who’d care about the record business…you can’t make any real money selling records anymore anyway! And, this type of music doesn’t get any radio play. And it’s only idiots and casual music fans who listen to the radio. The hard core is on a personal adventure, a quest to find something great.
I’d love to tell you this show kills. But it’s just a bit off. Could be the recording. Maybe I can’t hear the organ enough, maybe J. Geils’ fills aren’t mixed up front. But OH THE ENERGY! You wouldn’t walk out, you’d move and groove.

They’re dancing on the ceiling
They’re dancing on the floor
People everywhere comin’ through the door
They know there’s a party goin’ on
Do the dancin’ romance all night long
I know it’s cold outside
C’mon baby, I’ll keep you satisfied
All you gotta do is move
Every time you feel that groove