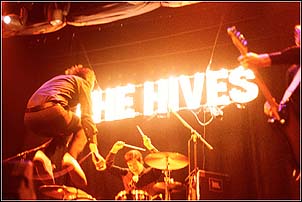 THE HIVES may not be recording any new material in the near future thanks to a legal dispute over their recent multi-million pound record deal with music giant UNIVERSAL.

The band have so far released their music through Swedish label Burning Heart, issuing two albums, ‘Barely Legal’ in 1997 and ‘Veni Vidi Vicious’ in 2000. Their compilation ‘Your New Favourite Band’ was licensed through Alan McGee’s Poptones label in the UK in a separate deal, and helped pave the way for The Hives’ huge sales in the UK.

That success has prompted Universal Music UK to step in with a rumored £7.5 million worldwide album deal. But a dispute has started over who currently ‘owns’ The Hives and their next studio album, as the band officially have one album left on their three-record contract with Burning Heart.

The band is also enjoying popularity in the USA. They reportedly signed a North American deal with Warner Brothers earlier this year. This deal apparently had the agreement of Burning Heart since the Swedish label had an association with US label Epitaph, which is 51%-owned by Warner Brothers.

"We see it as the end of the contract with them [Burning Heart Records] and that's why we've signed elsewhere," Hives guitarist Nicholaus Arson told Swedish paper Aftonbladet. "More I cannot say."

Burning Heart marketing manager Richard Ardermark commented: "We are totally shocked and disappointed. We have worked with The Hives for seven years, this has come completely out of the blue. There is a very gloomy atmosphere here right now."

Now The Hives and Universal UK face a legal challenge from Burning Heart, Epitaph and Warner Brothers over the deal. Lengthy legal arguments threaten to prevent The Hives being able to release any new music until the dispute is settled. In the past, artists including Prince, George Michael, Bruce Springsteen, Hole and The Stone Roses have seen similar disputes halt their record releases for a lengthy period.

He added: "Burning Heart have always been very proud to have been The Hives’ record company. Therefore, we are shocked to learn about the band signing a record deal with Universal, particularly since Burning Heart controls the exclusive worldwide rights to The Hives’ next studio album.

"The Hives’ have always been fully aware of their commitment to Burning Heart. In the circumstances, we have no choice but to vigorously protect our rights."