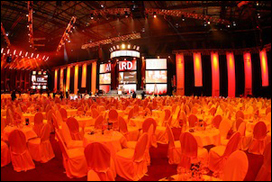 
Due to an alliance with the world’s largest event technology supplier PRG (Production Resource Group), LEA recently changed its name to PRG LEA.


The live entertainment industry celebrated itself in a 3,5-hour glamorous gala and again many celebrities and artists from the show business appeared on the red carpet: As for example Peter Maffay, The Scorpions, Scooter, Christina Stürmer, Roger Cicero, soul singer Joy Denalane, the musicians of Silbermond as well as many other VIPs from culture, sports and media.


The jury of PRG LEA, consisting out of famous music journalists, radio program executives and cultural managers, evaluated more than 500 concerts and shows in 2009.


Amongst the 15 categories of the Award are p.e. such as the tour promoter, the concert, the manager, the agent and the location of the year. German Initiative Music, the funding agency set up by the German federal government to promote the music industry in Germany, rewarded the LEA winner in the category 'music club of the year' – Berlin's "O 36" with a prize money of € 20.000,00.


The two nominees received further €2.500 each. Tour promoter of the year was – as in the years before, Marek Lieberberg with MLK. The award for the lifetime achievement was granted to Germanys media-giant Hans R. Beierlein, developer of many famous artists such as Udo Jürgens, creator of formats for music TV program and founder of Germany’s business magazine musikmarkt.


The German Chancellor Dr. Andrea Merkel was honoring the fifth anniversary with a written greeting, read by LEA inventor and producer Jens Michow, President of the Federal German association for the entertainment industry.


Here are the results and the winners of PRG LEA: