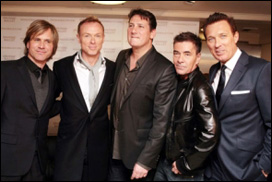 LONDON (VIP NEWS) — Fresh from the announcement of their first single in 20 years, Spandau Ballet's first studio album in two decades will be released on October 19th.

Entitled 'Once More', this is Spandau Ballet reinvented for the 21st Century, re-molding their classic hits with a lush, contemporary sound.

'It's how we would have made these songs the first time around if we had the maturity and know-how to achieve it,' says Gary Kemp, 'The playing is better, the production is better, Tony's voice is just incredible now. It is the logical conclusion of Spandau's sound. Our emphasis was to record the album with no synthesizers and no electric guitars but to produce a big sound.’

Produced by Danton Supple, responsible for Coldplay's X&Y amongst many others, some of Britain's greatest pop songs have been recast by a band adding new perspective to tracks they wrote as teenagers and in their 20s.

'We went to live in a studio,' smiles Tony Hadley, 'We rediscovered our friendship that was so important the first time round.' We are older, we're different people now and the album reflects that experience.' We're proud of who we are and the lives we lived before we got back together.' You can hear a band reborn in these songs, for us they are as exciting as when we first started the band.'


In the world of 'Once More' Spandau's debut single To Cut A Long Story Short is transformed from minimalist synth pop classic into an epic, brooding, Bond-esque soundtrack. The pop-funk of Only When You Leave is now a stripped back ballad, replete with stunning orchestral arrangements, a reflective take from a band bringing experience to their youthful hits.

The track is available as a free download at www.spandauballet.com to give fans a taster.

'She Loved Like Diamond is a particular favorite,' says Kemp, 'It charted quite low in the 80s, we panicked a bit.' We were trying to do what we'd managed with True and Gold but didn't quite pull it off. We were too immature to understand it.' It's so satisfying to finally do justice to the song.'


There are two new songs; the single 'Once More' is classic Spandau for the 21st century, featuring an incredible vocal from Tony Hadley and songwriting by Gary Kemp and Steve Norman. Immediately memorable, it is like you have known it for years and yet is as fresh as anything most contemporary artists have produced in recent times. With a rousing chorus, 'Once More' sounds like a great lost track from the band's Parade album, it's certainly the equal if not better than the classic 'I'll Fly For You', we defy you not to be singing along by the second chorus!

Additionally, there's the beautiful 'Love is All' written by Tony Hadley.' It's a song with a beautiful sentiment that builds into a fabulous crescendo.


The album was recorded at Hook End studios in Oxfordshire and Battery Studios in London.