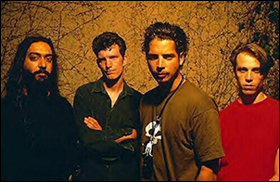 SEATTLE (VIP-NEWS) — Soundgarden will reunite for concerts in 2010, according to a Twitter message from frontman Chris Cornell which directs fans to a new Web site, Soundgardenworld.com.

The Seattle rock quartet — Cornell, guitarist Kim Thayil, bassist Ben Shepherd and drummer Matt Cameron — has not played live since splitting up in the spring of 1997.


Sources have told Billboard the group is weighing offers from several major U.S. and international festivals, but a tour routing is still a work in progress, due to Cameron's prior commitments to play with Pearl Jam in the spring and summer.


Cameron has been Pearl Jam's permanent drummer since 1998; that group recently announced its first North American date of 2010 as part of the second weekend of New Orleans Jazz & Heritage Festival (April 29-May 2), and will also play 10 European shows from June 22 in Dublin through July 10 in Oeiras, Portugal.

For many years after Soundgarden split, the instrumentalists were said to have had little contact with Cornell, and reportedly turned down an offer to reform for Sub Pop's 20th anniversary concerts in Seattle in 2008. Cornell was not on hand for an impromptu live performance on March 24, 2009, at Seattle's Crocodile Cafe, when Cameron, Thayil and Shepherd played the Soundgarden songs "Hunted Down," "Nothing to Say" and "Spoonman" with Tad Doyle on vocals.

But all four members were present at an October 6, 2009 Pearl Jam show in Los Angeles, when Cornell reprised the Temple of the Dog song "Hunger Strike" with the band, and sources say reunion plans began to take shape shortly afterward.

Soundgarden formed in Seattle in 1984, with an initial lineup of Cornell on vocals and drums, Thayil on guitar and Hiro Yamamoto on bass. Cameron joined on drums in 1986, and the following year, the band released its first single, "Hunted Down," on the nascent hometown label Sub Pop.


Soundgarden fully broke through on 1994's five-times-platinum "Superunknown," thanks to smash rock radio hits such as "Spoonman," "Black Hole Sun" and "Fell on Black Days."


After headlining the 1996 Lollapalooza festival in support of the album "Down on the Upside," Soundgarden ran out of steam and broke up. Since the split, Cornell has released three solo albums and three more with the now-defunct Audioslave, which featured the non-singing members of Rage Against The Machine. Thayil and Shepherd have kept a low profile, only occasionally releasing music and collaborating with artists like Sunn O))) and Boris, Probot, Steve Fisk and Mark Lanegan. Â Shepherd and Cameron also revived their side project, Hater, which released its second album, "The 2nd," in 2005. –According to Reuters