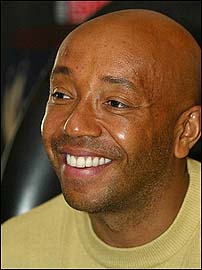 In his white, six-seat SUV, the godfather of hip-hop culture is racing up Amsterdam Avenue in Harlem, whizzing past crowds on corners, buzzing around double-parked cars.

His driver, Kenny Lee, is making up for lost time; Simmons had ordered a detour to his favorite vegetarian burger spot. The sweet essence of fried onions and french fries hangs in the air even as Lee finally brings the car to rest.

Simmons is late for a book party he's hosting for Ilyasah Shabazz, who has written a memoir of her father, Malcolm X.

Inside the crowded ballroom, partygoers sip chardonnay. They listen to Simmons and others praise Shabazz and her famous father. The scene is cool.

But suddenly it gets very hot. An angry shout from the stage shatters the calm. It's Simmons' voice.

Simmons yells at the man who set his mood afire, Conrad Muhammad, a former Nation of Islam minister and radio show host who runs an organization devoted to cleaning up rap lyrics. These two have a lot of history.

Now they stand nose to nose. Just before the spark ignites, they are pried apart by bystanders.

Simmons is still steaming 20 minutes later as a friend, back in the SUV, tries to calm him, saying Muhammad was just trying to bait him.

"Well, he did a damn good job," Simmons replies. He says he can't remember the last time he raised his voice in anger in public.

"I get along with people," he pleads.

Closing his eyes, he gives thanks for the things he says gave him the strength to avoid a brawl — his daily yoga and meditation routines and his strict vegan diet. "The old me," he says softly, "I might have done something really stupid back there."

One might ask why Simmons would be troubled by anything that anyone has to say.

This is a man who became a millionaire in his 20s with the founding of his Def Jam record label. In his 30s, his "Def Comedy Jam" HBO show made him a television phenom, and he launched his successful Phat Farm clothing line.

Now, in his 40s, deals constantly in the works and involvement growing with the movers and shakers of politics, he's on top of the world.

Maybe, but Simmons won't dwell on that. The SUV is rolling again.

Russell Simmons has never recorded a top 10 song. Neither has he told jokes on a stage in a packed arena or acted in a hit movie. But he has made all those things happen — again and again for some of today's biggest stars.

His success is a byproduct of hard work and good fortune. But there's something else, those who know him say.

The way Barry Bonds can hit a baseball 450 feet; the way Mikhail Baryshnikov can float on air: That, they say, is the way Russell Simmons makes business deals.

He is a natural.

"Very few people can have 12 irons in the fire and still be totally focused," says Phyllis Pollack, a Los Angeles-based music publicist. While others get "flakier" as tasks multiply, "Russell takes each one of those jobs and works them to the peak."

From the days in the late '70s when he handed out fliers in the streets for the first generation of rap artists, Simmons' ability to identify and market street music, language, clothing and attitude has made him a chief architect of America's swelling hip-hop economy, recently valued at $5 billion worldwide by Black Enterprise magazine.

He has known failures — a couple of movies that have bombed and a hip-hop TV magazine show failed to take off.

But the flops have been few — not bad for a kid from a working-class neighborhood in the Hollis section of Queens, in New York City, the son of a schoolteacher father and city recreation department director mother.

Simmons dabbled with street gangs before enrolling in City College of New York in 1975.

Around the same time, he saw the potential in the city's burgeoning rap music scene and began renting dance halls and representing performers.

"He was my promoter, and even when he was selling records from the trunk of his car, I knew he would do something," says the rapper Grandmaster Flash, aka Joseph Saddler.

Simmons' greatest tool? His mouth, according to the Grandmaster.

"Russell has always been a great talker. He can talk to anybody…," he says. "You have to be real careful dealing with artists because they are very emotional, but he can talk to them and talk to people living on the street."

Early successful shows led to the start of the record company (he remains chairman, though he sold Def Jam Records to Seagram's Universal Music Group), and the rest became hip-hop history. In 1985, he produced the cult film "Krush Groove," and in 1991 produced "Def Comedy Jam" on HBO.

His latest television project is to capture the raw energy of poetry slams with "Russell Simmons Presents Def Poetry" on HBO.

Simmons is in a Manhattan sushi bar when three young people materialize.

"We are such big fans," one says loudly.

"Can we take your picture?" asks another.

Simmons smiles. "Where are you from?"

"Ohhhh. Well, you have my condolences," Simmons replies with a tiny smile.

A funky brushed steel door leads to Simmons' 14th floor office on 7th Avenue, where the prized spot on a wall goes to a huge charcoal drawing of Simmons and his wife, Kimora Lee Simmons.

The office is a magnet for wannabe rappers, poets and clothes designers. Even toddler models.

One day, a young mother with her tiny child wrapped in an oversized Phat Farm jacket begs a secretary for a visit with Simmons. She has to settle for an assistant; they disappear to a back office for Polaroids of the little angel. Afterward, the boy looks like he wants a nap but Mom is thrilled.

"It's like this all the time," the secretary says. "Everybody wants to be a star."

In his office, Simmons wants to eat his lunch. Stewed cabbage and greens.

But there's another visitor — a woman bearing gifts. Simmons protests, but …

In walks Gina Barbosa, from Atlanta. In one hand is a shopping bag with baby clothes for Simmons' 2-year-old daughter, Mein Lee. Simmons tries to give the gifts back. Barbosa insists.

In the other hand is a bound script Barbosa has just completed, a certain hit if only the right eyes read it.

Simmons' won't be those eyes today. He calls in his special projects editor, Nicole Duncan-Smith, and tells her to read the first 20 pages to see if it is any good.

Barbosa would like to stretch out the impromptu five-minute meeting, but Simmons firmly but politely says no.

During a long day with lots of time on the phone, Simmons dials just one outgoing call — to the Jivamukti Yoga Center to check who's teaching his 4:30 p.m. class.

Incoming calls as he crosses the city are revealing.

From a theatrical talent agent. From an HBO vice president. From Andrew Cuomo, who's seeking New York's Democratic gubernatorial nomination.

The head of a major international charity, beginning its search for a new executive director, calls to see if any talent has caught Simmons' eye of late. Simmons passes the assignment on to his assistant, Gary Muhammad.

"Find someone real good," he instructs.

Then Simmons adds: "Just a favor for a friend."

His SUV pulls up in front of Jivamukti, a yoga center that attracts Manhattan's healthy and wealthy seeking inner peace.

"What I get here could empower poor people," says Simmons, entering with no fanfare, an everyday presence.

In the sweltering studio, he joins 20 other practitioners of the ancient art. In minutes, sweat is rolling off his bald dome.

His movements are exaggerated. While others step into a position, Simmons hops. His chest hits the exercise mat with a loud THA-WACK!

His eyes shut more tightly than others' and his chanting is louder. It seems Simmons is showing off. But that isn't the case, he says.

He's merely enjoying a state of ecstasy he believes has converted him from aggressive and selfish to composed and generous.

"It is relaxing but it's more than that. I feel connected. It makes you look deeper into yourself."

He took up yoga eight years ago in Los Angeles to meet women. "Then I started looking deeper and it started making sense."

What makes sense for Simmons today?

He mentions the idea of giving back.

The Rush Philanthropic Arts Foundation gave away $300,000 last year to give disadvantaged youth exposure to the arts. One example: He hosted 700 youths at tapings of the HBO poetry show.

"He layers his philanthropy on top of every project he works on," says Ellen Haddigan, executive director of the foundation.

Recently, he's been emerging as a force in politics. He helped stage a City Hall rally to protest education cuts; it attracted stars such as Alicia Keys and Wyclef Jean, along with thousands of school kids.

Phat Farm has been raising awareness of the reparations movement in its ads. Simmons also co-chaired UrbanAID2, an all-star benefit concert to help fight AIDS in the minority community.

"Young people are the nucleus for change in our society," Simmons explains. "But you have to speak their language to engage them."

Not everyone buys Simmons as an activist.

One critic called the City Hall protest a "publicity stunt." And the first words of a Village Voice story in December stung.

"Is Russell Simmons an Uncle Tom?"

The article criticized Simmons for his support for Cuomo, the former housing secretary who is white, in the race against state Comptroller Carl McCall, who is black.

"I respect Simmons for his business acumen," Muhammad says in a phone interview. But he questions Simmons' commitment to the black community. "He spends his time in Soho and the Hamptons telling white America what black culture is, and he doesn't even know."

"His artists walk around in baggy clothes" and use degrading terms to describe women, Muhammad said. "They are reviving images that we are working against."

Simmons has heard the criticisms before. His response:

"I don't tell my artists what they should or should not say. If they are talking about the pain of their experience on this planet, in this country or on their street, am I supposed to tell them not to express it?"

It's late and Simmons is finally heading home. He is back in the SUV when, by chance, he spots a childhood friend. The man's nickname is Spuddy, and he's up to his usual tricks — selling fake gold chains to tourists in a midtown Manhattan neighborhood far from his own.

From the car, Simmons calls to him.

"You up to the (stuff) again?" Simmons says, half laughing, half scolding. "You know (you're) going to end up in jail."

Rush. The name they called Simmons as a kid has stuck — because it's true.

Before moving on, Simmons reaches into his pocket, peels off several $50 bills and pushes them into his old friend's hand.

With a handshake, Spuddy disappears into the night.