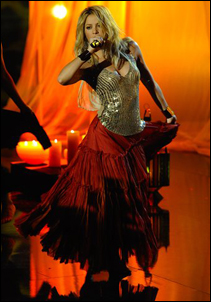 LOS ANGELES (CelebrityAccess MediaWire) — Shakira with more than 214 global award nominations and more than 50 million albums sold worldwide, has announced her 2010 global tour and her return to North America. The Live Nation produced summer tour will visit New York's Madison Square Garden on September 21st, Houston's Toyota Center on October 8th, and the Staples Center in Los Angeles on October 23rd. In addition, the tour will bring her show to top arenas and a host of additional cities throughout the summer and fall. Additional dates to be announced soon.

Tickets for Shakira go on sale in select markets beginning May 7th at LiveNation.com. To ensure affordability for all of her fans, Shakira is offering a limited quantity of tickets priced at $9.50* in select markets.

Shakira has toured the United States just twice in her career, first in 2002 for the "Tour of the Mongoose" and again in 2006 for the "Oral Fixation," Tour which grossed more than $100 million.

In keeping with Shakira's inspired originality, as well as her sensual rhythms and deliciously unpredictable spirit, the tour promises to push the limits of the live concert experience, bringing fans a pulsating spectacle crossing all musical boundaries.

In addition to her summer tour, Shakira will take the stage at some of the year's hot summer festivals including London's legendary Glastonbury Festival and Rock In Rio in Lisbon and Madrid. Shakira's song, "Waka Waka (This Time For Africa)" has also been selected as the official anthem of the 2010 World Cup.

Shakira will perform songs from her collection of smash hits and her new album, She Wolf, released in the US on November 23rd, 2009, by Epic Records. The album is the follow-up to 2005's Platinum certified album Oral Fixation Vol. 2, which spawned the hit single "Hips Don't Lie" reaching No. 1 on the Billboard Hot 100 which was #1 in 55 countries and became the most played song in the history of US pop radio. The critically acclaimed She Wolf continues to grow in popularity with the recent release of the album's third single, "Gypsy," preceded by hit singles "She Wolf" and "Give It Up To Me", featuring Lil Wayne. Shakira made Billboard chart history again in 2010 with her 17th top five hit on the Latin Pop Airplay chart with "Gitana," giving her the most top five titles by a female artist in the chart's 16-year history. –by CelebrityAccess Staff Writers