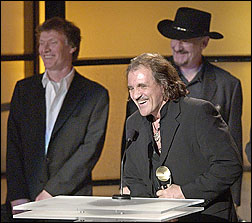 (CelebrityAccess News Service) — The press room at the Rock and Roll Hall of Fame at New York's Waldorf-Astoria has tripled in space over the past few years while the media has quadrupled or quintupled. However, while the festivities used to be unpredictable, the inductees and presenters have practically ceased in dealing with the Fourth Estate. Last year, only two artists talked to the press.

To partially combat this, VH1 (the ceremony is truly catered to VH1 now) instituted a ridiculous red carpet that was situated under a tent on the sidewalk of Park Avenue from the hotel's entrance to 51st Street, where it turned a third of the way down the block towards Lexington Avenue occupying the sidewalk and one lane in the street. Narrow to say the least. This way the event can have more star power for the TV audience.

Of the newly inducted Hall of Famers, the Dells, Jackson Browne, Bob Seger, Traffic and ZZ Top reached out to the press; however, Traffic's Dave Mason and Suzanne Wood (the sister of the late Chris Woods of Traffic) did not come back, and Billy Gibbons was missing from ZZ Top.

Mason did not even perform with Traffic on the group's revisit to "Dear Mr. Fantasy"–the only song Traffic performed — possibly the only time an inductee played just one tune in the annual 19th induction ceremonies. And Steve Winwood and Jim Capadli would not take questions. No wonder with Mason a seeming outcast, they just posed for photographers and TV. Mason, however, did lead the last jam of the night, his "Feelin' Alright," with Winwood buoyant on keyboards.

After the jam, and four hours into the early morning, Dusty Hill and Frank Beard of ZZ Top came to the press area, which was already 80 per cent depleted. With just one Top, the group was affectionately dubbed "Z Top" by the press. Hill said Gibbons was probably hanging out with Keith Richards after the jam. When asked how he felt playing with all the musicians on stage during the jam, Hill said, "It was crowded, I'm not used to it."

Prince, Jann Wenner and George Harrison widow's Olivia and son Dhani were no shows in the press room, although the Harrison clan claimed they were interested in meeting the press before the dinner even started.

The evening could have been shorter. There were inexplicably no side-men inducted this year and no one wanted to say why, and just one non-performer/lifetime achievement inductee, Wenner. The filmed sequences were even shorter, less historic and more reflective with the inductees interviewed, and thus less informative and less interesting. The usual Hall of Fame "business" from Seymour Stein and Ahmet Ertegun was thankfully brief. They did mention that Clive Davis donated his personal papers to the archives of the Rock and Roll Hall of Fame.

Browne was the most profound backstage. When asked about this year's political race, he said he will get involved. "Rock and roll is a tool for empowering people, and besides it's an easy way of getting people to get to the next step," he offered. "People need to take the next step for themselves."

In a lighter vein, Browne was asked what else he wants to accomplish: "I'd like to surf pretty well," he said nonchalantly, "and ride a huge wave in perfect form and gloat about it."

Kid Rock introducted Seger by saying he went from station wagons to jets and "Bob Seger has paid more dues than all the artists in the current Top 40 combined." Backstage Seger talked about his retirement from the road. "When I was 47, I had my son and decided I wanted to watch him grow up," he said. "We went out on one tour when he was four, and it was rocky on him." So while retired from the road, Seger, who has released just four albums over the past two decades, has been writing and hopes for an album release in October. But there are no burning desires to tour again.

The Dells came backstage with Robert Townshend, the filmaker who inducted them. The Dells were the inspiration for his movie "The Five Heartbeats." Charles Barksdale said the Dells "were one of the best harmony groups on the planet," and he called rap music "not a communication gap but a generation gap."

On stage, he said, "We had a lot of hit records. Most of them, we didn't get paid for. All of you out there that still owe us royalties, we're coming after you."

There were many highlights in the awards ceremony. Prince's full production –again the first in the history of the show — with grafitti spurting after his three songs ("Let's Go Crazy," Sign 'o' the Times" and "Kiss") opening as well as his killer guitar solo on Harrison's "While My Guitar Gently Weeps." Prince might have felt he was at the Academy Awards as he thanked people and even Warner Bros., who he once accused of slavery.

"When I first started out in this music industry, I was most concerned with freedom: freedom to produce, freedom to play all the instruments on my records, freedom to say anything I wanted to," reflected Prince. "I embarked on a journey more fascinating than I could ever imagine, but a word to the wise to the young artists – without spiritual guidance too much freedom can lead to spiritual decline."

Keith Richards, who wore trinkets in his hair once again along with a rainbow bandana, inducted ZZ Top. Not to be outdone, Sir Mick Jagger was a late add-on to induct (along with Ahmet Ertegon) Wenner. Jagger was quite humorous and took a few knocks on Wenner's US magazine as well as praising the idealism of Rolling Stone (the magazine) for its long articles where the writer spent days with the band. Before Rolling Stone, Jagger said, "rock performers were treated as third-class fly-by-night citizens having a hard time to form one brain between them."

Wenner, on the other hand, might have given the longest acceptance speech in

the Hall's history, which was quite informative then unfortunately maudlin.

Perhaps the highlight of these affairs are the speeches, and practically everyone came prepared and read from notes. Kid Rock, who inducted Seger, lost his place and misplaced notes a few times. Bruce Springsteen's long intro for Jackson Browne was the most profound. He talked about what he learned early on from Browne. Two things stood out. He said that Browne's shorter songs taught him to try to be concise in songwriting. "Each song is a diamond," he marveled. "I need less words." Springsteen's third album ("Born to Run") was less wordy and sold millions. He described Browne as "one of the first songwriters I met who demonstrated the value of thinking hard about what you were saying."

Secondly, Springsteen marvelled at how handsome Browne was and that Browne "was a magnet" for beautiful women who attended to his concerts while The Boss attracted mostly men to his shows. He came back to this a few times. "Jackson was drawing more women than at an Indigo Girls concert," he quipped.

Browne was paying attention. He admitted that, "I can't write a postcard without ripping it up a few times."

Ah, the beauty of the Rock and Roll Hall of Fame induction ceremonies is the inductor and inductee speeches, which are cut to shreds on the televised show. Alicia Keyes and Outkast (both Big Boi and Andre 3000 were on stage at the same time) inducted Prince, Dave Matthews inducted Traffic and Tom Petty and Jeff Lynne inducted fellow Traveling Wilbury Harrison. Kid Rock talked about Seger's manager Punch Andrews and so did Seger. And Jagger concluded his Wenner induction by saying, "This is a heartfelt occasion, and I'll treasure the memory all the way to the airport."

And the VH1 logo, which is usually situated on the lower right side of the screen, is inching NNW, closer to the middle of the screen. And that was quite annoying for a closed-circuit industry screening. –Bob Grossweiner and Jane Cohen