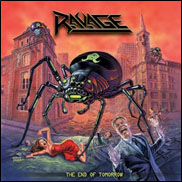 BOSTON, MA (CelebrityAccess MediaWire) — Ravage, the heavy metal band from Boston, who released their Metal Blade Records debut, The End Of Tomorrow, in August, have been forced to cancel the 5 remaining dates of the band's US tour.

"I don't know if you've been following the travails and tribulations of our tour on our MySpace blog, but for those of you who haven't – I'll give the "short, short" version (if you are a fan of the film Spaceballs, you'll get tha allusion).

We planned a self-financed, self-planned, 3-month full USA tour a few months ago that we knew would be extremely difficult, and possibly suicidal, but we wanted to do all we could to try to garner some attention for our new album, for traditional heavy metal in general and to finally get a chance to play to all those people across the USA who have asked to see us over the years.

In some respects, the tour was a success – we got to meet many cool new people – people who had picked up the album and had heard of us before – we got to visit some cool new places, and we got to meet some cool bands and experience life on the road for the better part of 3 months. In many respects however, the tour was a major failure. We dealt with poorly promoted events, many unsupportive local acts (acts that even didn't stay to see us play or dropped off the bill entirely with little notice), poor fan turnouts, shows canceled by the club at the last minute, and the worst part – numerous van breakdowns and incompetent repair jobs – which forced us to cancel far too many shows.

As a result of this, we lost a ton of money and our van was eventually destroyed (I'll detail the full story in the coming weeks). Despite this, we looked into renting a vehicle to get to the remaining 5 shows – but we were unable to get it to make financial sense.

We hope to get back to the areas we were forced to cancel in as soon as we are able to regroup and get going again. Hopefully sometime next year.

Thanks to everyone who helped us out with a place to stay, a place to play, allowed us some good bands to play with, and the brave few true metal maniacs who came out to the shows and offered their support. You know who you are.


Those who screwed us over… bands who dropped off gigs at the last second and didn't bother to even call the clubs… local "support" bands who didn't even bother to stick around past their own set… those who didn't properly repair our vehicle so it broke down for the same problem numerous times… you also know who you are. We won't forget either.


We will return to play for everyone who wanted to see us in the areas we missed. Till then, RAVAGE IN PEACE!! –by CelebrityAccess Staff Writers