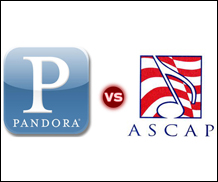 NEW YORK (Hypebot) — Pandora has taken performance rights organization ASCAP to federal court in hopes of paying lower rates for the performance of ASCAP songwriters and composers’ works. The lawsuit comes after the two sides failed to reach an agreement on lower music licensing fees together, as Pandora found it difficult to reach profitability with the current payout structure. The Oakland, California-based company is now calling on federal courts to set more “reasonable” rates for the licensing fees it needs to pay out in order to stream ASCAP members’ compositions.

In a report published by Bloomberg, Pandora is said to be actively seeking a blanket-licensing fee that would cover every song represented by all 435,000 members of ASCAP. Back in 2005, Pandora reached an “experimental” fee agreement with ASCAP that lasted until 2010, although the terms of the arrangement established since then were not disclosed in the filing.

“The license rates and other material terms of the 2005 license agreement were presented to Pandora by ASCAP as being effectively non-negotiable,” Pandora’s court papers read. The company also said that the before mentioned “experimental” license agreement was “ill-suited and not reasonable” to begin with.

"ASCAP continues to seek rates higher than the current rates and above the agreement that they reached earlier this year with all of the major radio groups, which covers both broadcast and Internet radio usage for the majority of our competitors," said a Pandora spokesperson to Billboard. "As a result, we are initiating the process that has been in place for decades to resolve royalty disputes with ASCAP."

“It’s outrageous Pandora would try to reduce the already nominal amount they pay songwriters and music publishers, when Pandora’s business model is based entirely on the creative contributions of those songwriters,” Israelite said in a statement. “To file this suit at the same time that Pandora’s founders are pocketing millions for themselves adds insult to injury.”

In any event, the lawsuit doesn’t reflect to well on the side of artists’ interests for the company, which reported $338 million in revenue last year alone, a market cap of approximately $1.6 billion, and a user base of 150 million registered users in the United States.