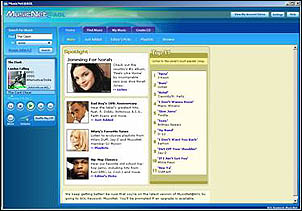 Just over a year after its launch, MusicNet@AOL has signed up more than 250,000 subscribers making it the leading on-demand music subscription service available online. AOL integrates MusicNet@AOL throughout its music programming and products. AOL Music represents the #1 music destination online with more than 19 million visitors per month (comScore MediaMetrix).

America Online has added an enhancement to MusicNet@AOL that lets subscribers to the music subscription service buy individual songs a-la-carte for 99 cents each. The option to purchase and burn songs to CD is now available to all subscribers who will pay one flat rate membership fee of $8.95 which allows them to download and stream on demand any of the 600,000 songs in MusicNet@AOL's catalog.

"A legal digital revolution is underway, and more than a quarter million fans experience it every day on AOL, where members have made MusicNet@AOL the nation's No. 1 on-demand music subscription service," said Bill Wilson, senior vice president, AOL Entertainment. "And now we've made the MusicNet@AOL experience better than ever. For less than the cost of a single CD a month, members have at their fingertips more than a record store's worth of music, letting them discover and explore a vast world of musical entertainment."

Alan McGlade, CEO of MusicNet, commented: "We couldn't be more thrilled about our successful partnership with AOL. In less than a year MusicNet@AOL has established itself as the largest on demand music subscription service with new customers coming on at a rapid pace. This is what happens when two leaders in their respective businesses join forces to deliver a great experience for consumers." –Bob Grossweiner and Jane Cohen