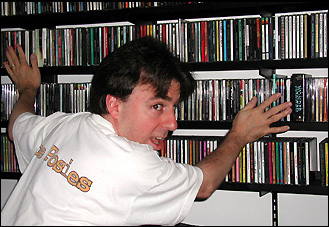 Tony Sachs and Sal Nunziato (profiled by CelebrityAccess June 1, 2001) own NYCD, a mom and pop record store on the Upper West Side of Manhattan. They are concerned about the rising CD prices and how it is affecting the retail business and ultimately the touring business. An edited version of this opinion piece was published in the letters to editor section of Billboard magazine (June 22, 2002), but the authors felt that too much was edited out. (CelebrityAccess is proud to present their opinion, but their opinion in no way necessarily represents the opinion of CelebrityAccess.)

If the execs at the major labels had bothered to step out of their cushy offices and into a record store over the last two years, they wouldn't still be busy scratching their heads and wondering whether high prices are contributing to the slowdown in music retail. They could have heard customers asking why the prices are so high, and seen them putting the CDs back on the shelves and walking out empty-handed.

We run an indie CD store in New York, and literally every single day we have to apologize to people for the high prices of new CDs, and explain to them that our prices are not only competitive with the big chains, but that we quite often beat them. We don't tell them, of course, that in doing so we're reducing our already minuscule profit margins down to near zero. We could talk until we're blue in the face, however, and it wouldn't make much difference — $18.99 for a new CD is still $18.99, no matter what the reasons.

The industry heads ought to realize they can't have their cake and eat it too. They can't kill the singles market, focus all their attention on singles-based artists (Backstreet Boys, Britney, etc.), AND raise the prices of their CDs. They can't focus exclusively on the teen market and then price CDs beyond the reach of the average teenager. They can't try to discourage downloading music without providing a reasonable and inexpensive alternative (such as, um, making SINGLES? Or making CDs CHEAPER?). Something's got to give, and unfortunately, that something is our business. While the label bigwigs collect their huge salaries and stock options, we retailers in the trenches are finding it tougher and tougher to make ends meet.

Stores like ours have a huge influence on what people buy, because unlike the big chains, we are regularly asked by our customers what we like, and then buy what we recommend. Unlike the chains, who will push a new CD because they're getting P.O.P. or some similar consideration, we push albums that we like and that we think our customers will like, even when our profit margin is lousy and we're getting nothing from the labels. Norah Jones and the White Stripes are two of our biggest sellers, not only because we love them and recommend them all the time, but because they're priced cheaply enough so that customers are willing to take a chance without having heard them. Once those prices went up, however, sales dropped off accordingly. It also happened with the Strokes — we sold them by the bushel at $11.99, but sales slowed to a trickle as soon as we had to raise the price to $16.99.

Prices don't have to go down drastically for customers to be happy. As recently as 4-5 years ago, the vast majority of our new releases were priced at $14.99 or less the first couple of weeks out of the box, and our business was booming. Now we're hard-pressed to make them $16.99, and within a week or two the price is up to $19-20. And mind you, this is happening in the face of an economic slowdown.

The problem is that nobody talks to retailers like us to get any idea of how to improve the situation. It seems like the heads of the labels have no clue about what's actually going on at retail, apart from perhaps the largest chains. The all-important indie reps are at the bottom of the major label food chain, and they're among the first to get cut when business is bad. But they're the main source of communication between the stores and the labels, a connection that must be maintained if music retail is to survive intact.

Now that ticket prices for big-name concerts are in the $300 range, more artists and their promoters feel comfortable about charging $100 a ticket for terrible seats in enormous sports arenas with lousy acoustics because, hey, at least it's not $300! Radio has fragmented itself into oblivion, and MTV and VH-1 show more "Real World" marathons and "Movies That Rock" than actual music videos. As a result, there are two places left to hear and buy music — the Internet and record stores. And thanks to the labels insisting on keeping their prices at stratospheric levels, the stores may not be around much longer. It's hard to believe that the majors have made the retail situation so dire while completely ignoring the quickest and most simple solution — LOWER THE PRICES!

If the labels had simply listened to retailers — and more importantly, their customers — two years ago, perhaps the recession we're now seeing in full force could have been minimized, if not sidestepped completely. Hopefully they'll learn from their mistakes and start listening to the "little guys" — if we don't get driven out of business by their current thick-headedness.