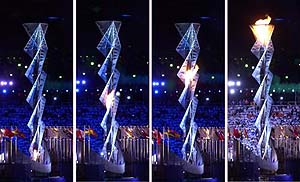 A quarter of the country watched NBC's first broadcast of these Winter Olympics, making it the highest-rated opening ceremony ever.

The 25.5 national rating and 42 share Friday night were a stunning and immediate turnaround from NBC's coverage of the 2000 Sydney Games, which finished with the worst ratings for any Olympics since 1968.

An average of 25.5 percent of all U.S. TV homes and 42 percent of TVs that were on were tuned to NBC from 8-11:45 p.m. EST, and Nielsen Media Research reported that 72 million people watched at least part of the show.

What makes the rating that much more remarkable is that it beat the previous record for a Summer or Winter Olympics opening night — the 24.2 rating and 37 share that CBS drew for the Squaw Valley Games in 1960, back when the total TV universe consisted of the three major networks.

With the proliferation of cable channels and the Internet, the broadcast networks have had an ever-shrinking audience from which to draw viewers. That's been reflected in the increasingly smaller ratings for major sporting events. Last week's Super Bowl, for example, tied for the third-lowest rating in the last 30 years for the NFL's championship game.

The tremendous tune-in Friday reflected what NBC said two polls it conducted in recent months had revealed: Anticipation of these Olympics was much higher than before Sydney. That could be because these games are being staged in the United States, and it also could be a result of an increased desire to root for American athletes in the aftermath of Sept. 11.

NBC's coverage of the 2000 Olympics was hampered by the 15-hour time difference between Australia and the U.S. East Coast and other problems, including competition from NFL games and baseball pennant races. The TV audiences for the Sydney Games were so far below what sponsors were promised that NBC was airing extra ads by the middle of the first week to make up the difference.

The advertisers paying about $600,000 per 30-second spot this time around had to be pleased with Friday's viewership. And there won't be much in the way of TV competition from other sports during the Olympics — two of the biggest overlapping events, the NBA All-Star game and Daytona 500, are both on NBC.

The Salt Lake City opening ceremony was highlighted by the entrance of a tattered American flag that flew at the World Trade Center on Sept. 11, and it was capped by the lighting of the Olympic cauldron by members of the 1980 "Miracle on Ice" U.S. hockey team.

Salt Lake City had the highest rating of any market, with 65.5 percent of all TV homes tuning in. The country's biggest market, New York, had a 30.3 rating, with No. 2 Los Angeles — where the telecast was shown on a 2-hour tape delay — registering a 25.8 rating.