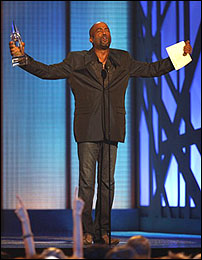 What kind of crazy world do we live in where the CMAs are better than the VMAs?

One in which the big winner is an MTV castoff, considered to be too old and too unhip for the mainstream.

He may have only won Best New Artist, but he won the evening, he was the only award winner to get a spontaneous standing ovation, for not only his achievement, but the sincerity and honesty of his acceptance speech.

Darius was the anti-Kanye. Without going all Uncle Tom, he spoke of acceptance by the community. Like Nashville and country radio are really going to embrace a faded black rocker from South Carolina? And he thanked his wife and three kids. For being understanding while he was gone, on the road, trying to earn a living. And believe me, that's what it takes. Show me a divorced country singer and you might find evidence of infidelity, but the true breaking point was the absence, the lack of contact, as the performer traipsed around the country, in much less glamorous circumstances than the public believes, hawking himself and his music, just to stay in the game. And Darius thanked Doc McGhee. Isn't it fascinating that Bon Jovi's old manager had Nashville success with a rocker with one tenth the footprint of his old client and Bon Jovi failed miserably in the country sphere? Maybe because Darius Rucker seemed to play by Nashville's rules. Rather than just add a banjo, he focused on songwriting, telling stories, not looking to crash the party so much as gain entrance.

And for all the flash on the VMAs, isn't it honesty and human emotion that truly sells music? Whilst the rappers are beating us over the head, telling us how great they are, in Nashville you lead with your music. Mr. Rucker played by the rules and won. A heartwarming story.

And although hokey, Brad Paisley and Carrie Underwood were great hosts. Made me wonder whether musicians should act, play roles, read lines at all, but they made the most of it. Rather than being wooden, they played along with the script, almost seeming to exist outside of it. To the point where you felt like members of your family were on stage performing. And stunningly, since they seem to fail in every awards show in which they're used, their comedy songs were actually funny, and endearing.

Too many acts were hyping their next single as opposed to the hit fans wanted to hear. Instead of being a celebration, it was a marketing opportunity.

And then there were strange choices. Why did Zac Brown and his band perform "The Devil Went Down To Georgia"? I expected Charlie Daniels to come out on stage. But he didn't. At least not in the fast-forwarded images that flew by on my screen. You couldn't play "Chicken Fried" or "Toes"?

And speaking of comebacks… How weird is Naomi Judd? Hi-def makes those facelifts unmistakable. And Wynonna, I feel for you, having that mother. But can you spend a little less time in the tanning booth? Or just have them spray on a lighter layer of brown/gold?

Miranda Lambert performed better than when I saw her in that club, but "Gunpowder & Lead" was a scorcher, a "Tumbling Dice" with "Rocks Off" speed. "White Liar" may be a single, but it's an album track.

And Carrie, you're lovable, but can you release a different album? The formula is so curdled, even a baby couldn't swallow this milk. How about a down and dirty record about how you really feel. How about a little Loretta Lynn with the gloss.

And speaking of rockers, Dave Matthews got a big ovation sitting in with Kenny Chesney. Dave can't get arrested on MTV, but he does boffo at the b.o., and his fans scooped up more of his new album than that of almost any MTV star. Who's the winner here? Certainly not the flavor of the moment on the VMAs.

And it wouldn't be a CMA Awards show without Kid Rock, who handled himself admirably. But what's up with the seventies sunglasses? Are they coming back?

And I like Lady Antebellum, but who could love them? Their material is so bland. Kind of substandard Brewer & Shipley. But credit Gary Borman. He built them into award winners. And Keith Urban is on a juggernaut!

I guess you're wondering how good the show could have been if I'm making these criticisms.

Yes, too much of today's country is formula, not exceptional.

But at least they're promoting songs. Which you can sing along to, however evanescent they might be.

And Taylor Swift is the entertainer of the year. Not only in country, but America at large. When you're nineteen, and everybody tells you they love you, you're gonna believe them. But they'll forget about you soon if you don't keep working, keep delivering the hits. That's the reality Hootie spoke of.

And that's the truth.