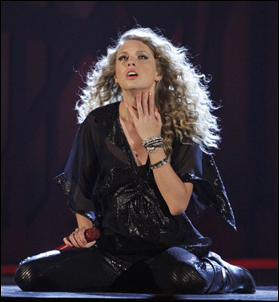 My head is spinning.


So, AmEx buys full page ads in major newspapers. Is that really the problem? That no one knows that Taylor Swift is going on tour? They've got to get the word out?


Chances are, if you need that level of advertising, you're not gonna be able to fill the building. And that's not the case with Taylor Swift. She can sell every damn ticket over and over again.


Then, when Taylor Swift says she wants tickets to be $20, so all her fans can go to the show, Mr. Messina says: "Taylor, you can't do that 'cause you can't afford that. It would cost you so much money." Huh?


Only a promoter could think this way. What he's really saying is, if you don't charge more, you'll make LESS money, and I'LL make less money! Notice he doesn't say Taylor is going to LOSE money! Because she's not!


Listen, Taylor is better than most. This is not about her. The whole ticketing fracas is not about individual acts. It's a cancer endemic to our industry that is only harming us. Because you lose the trust of the consumer and you have no business.


Talk to anybody putting on shows right now. Business is TERRIBLE! Don't listen to the press reports. The public is staying home. And acts are not lowering their prices. And those on the talent side want to make as much money as ever, even though recorded music sales in most cases have tanked and the public has little money. This is a recipe for ongoing business success?


It's when Louis says there should be a government solution that I get pissed. Just like the government should solve the file-trading problem, which has gone on for a decade. Business problems require business solutions.


The scalpers are a problem, but they're not THE problem!


The problem originates with the talent.


The talent could charge a fortune for the tickets. But they're worried about blowback, the public's perception of them. They don't want to APPEAR greedy, so they revert to subterfuge. So, they don't LOOK greedy, even though they ARE greedy.

Heinous Ticketmaster fees, if not kicked right back to the artist, which happens in the case of many stars, go to the promoter, so he can make some money. Artists could include the fees in the overall price, eliminating customer anger and confusion, but they don't want to appear greedy, they'd rather that Ticketmaster take the heat.


So what do we need?


An all-in price. Having the customer angry at Ticketmaster and Live Nation does not bode well for the concert industry in general, because this is where the transaction takes place.


Acts either have to charge fair market price for the tickets, or insure that the true fans get ahold of the good tickets at what is essentially a price below fair market value.


No one expects a BMW for the price of a Hyundai. Price the tickets fairly, at their real value, and scalping is to a great degree eliminated. Then again, the acts are fearful of charging a grand for a seat, they're afraid the public is going to see them like they see the bankers on Wall Street. Unfortunately, this would not be inaccurate, both are incredibly greedy (although the banker does make more).


Or, institute systems that allow the fan to get a good seat at a cheap price. Like putting the name on the ticket, a la Nine Inch Nails.


Now don't think everybody involved is stupid. Greedy, yes, but not stupid. Irving Azoff is aware that scalpers use low value credit cards to get around paperless ticketing. He couldn't get the credit card companies to play ball with him, they couldn't see the problem. But now they do.


And Irving says he's got the technology and the willingness to show exactly what tickets are on sale for a gig, and will soon have the ability to auction them off/variable price them like airline tickets.


But instituting the procedures and having acts use them is something different. Does an act really want to let people know that 1/20th of the tickets are actually available to the general public on the on sale date?


I say if you've toiled hard and long in the alley, you're entitled to make the dough. That's your choice, charge up the yin-yang. Or, leave a little in order to insure future good will, keeping the relationship with your fans by allowing them good seats at low prices. But the acts want it both ways, they want to maintain the good will and make all the money. And that's where I've got a problem.