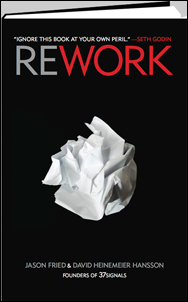 When we were all in it together, the key was to be first. Now we’re all grazing in different locations, stumbling upon things, and what might be new to us is actually old, but does anybody care?

Because with an attitude like that you’re positively stuck in the last century, and the 37signals crew is all about residing in this century, to your advantage.

I stumbled upon 37signals and "Rework" in the new "Newsweek". And I kept reading the article because of the introductory paragraph, wherein it was stated that Mint.com was sold to Intuit for $170 million and Jason Fried of 37signals responded, "Is that the best we can do? Become part of the old generation? How about kicking the shit out of the old guys?"

Whew. This goes contrary to America’s business philosophy, wherein the corporation is bigger than any personality and the goal is to cash out so…

So what? So you can go lie on the beach? Do you really think this will be satisfying to an entrepreneur who’s worked so hard for a toehold? No, that’s when the going gets interesting, when you’re finally big enough to roll the dice against the big boys, to see what you’ve got. Never mind that the landscape is littered with companies that were decimated when sold to a larger competitor. Remember when Snapple was a scrappy upstart? When you chugged the bottle and felt part of a team? Do you even drink Snapple anymore?

In business, many argue it’s about the cash. But is it really about the cash in music? Isn’t your career based on more than a P&L? Don’t credibility and believability count in music? In other words, should you be looking for the big check, or is that going to ruin you? Especially after the company that ponies up the money tells you how to run your business/make your music. How many of the original concert promoters rounded up by Bob Sillerman are still involved at Live Nation? Those were fierce independents, they couldn’t report to anybody but themselves. Furthermore, it’s simple to argue that the concert landscape would be healthier, at least from a consumer standpoint, if the SFX roll-up had never occurred.

As for bands… Think about Snapple. People loved the drink when the company was an independent renegade. But once it was sold by the man, they were done. It’d be like Apple selling out to IBM, never mind Microsoft. Fans like the story. Of the written-off upstart who triumphs.

The whole music business infrastructure, the baby boomer infrastructure anyway, is about selling out. The manager and the lawyer want their commission. Make that deal with the label, we’re gonna get a check! Do that endorsement deal, we’re gonna get paid! As for the agent, he’s not about investing in the future, he’s not about leaving money on the table. Oh, don’t argue with me, there are exceptions, but the agents are the biggest whores out there. And why not, with acts jumping ship willy-nilly. Then again, the longest agent/act relationships are when the agent invests in the act’s future. Then again, how much of a future do today’s acts have?

Anyway, at the bottom of this "Newsweek" article, there’s a list of ten precepts. Which first made my jaw drop, and then had me nodding my head in agreement.

If I hear one more asshole telling me how little sleep he gets, I’m gonna explode. You need sleep to be productive! Furthermore, outside influences not only give you perspective, but inspiration! Live in a vacuum and you’re Microsoft, thinking you’re the best, getting your ass kicked in Smart Phones, not even seeing the MP3 player market until it’s way too late.

Wow. Maybe I’m talking out of self-interest. But I judge you on your typos and if I can’t understand it, I don’t care how great your idea is.

Ever notice the bigwigs in the music business don’t have MBAs, didn’t go to music business college? Formal education teaches you how to think like everybody else, when in a cutthroat business like music you’ve got to think for yourself. You like rules, but rules imprison you, they’re the enemy.

4. Drug Dealers Are On To Something

Or, as Ahmet Ertegun once said, a hit is a record that gets a listener to jump out of bed, put on his clothes and go to the all night record store to buy it after hearing it on the radio. I listen to the radio in my car all day long. But it’s rare that I have to write down the title of a song and rush to my computer to download the track. Happened with Gnarls Barkley’s "Crazy". And, in the CD era, with Alanis Morissette’s "Hand In Pocket", I had to go home and rifle through hundreds of CDs to find "Jagged Little Pill". And then there’s Walt Wilkins/Pat Green’s "Wrapped"… Point is, hit records sell themselves, like drugs. If your record is not selling itself, you’re never going to make it. In other words, if you’re working me, you’re in trouble. Your track should be so great I hear about it from someone else!

They give their secrets away.

Interesting, I’m still thinking about this one. But, if you break an act, and it’s signed to a long term deal, why not tell everybody how you did it, for the overall health of the business!

Separates the company into creatives and worker-bees, leaders and followers. Everybody can innovate, and should. Why do the best ideas have to come from the top? Just because that guy’s paid the most? Maybe the kid on the bottom is more in touch with the street!

7. You Need Less Than You Think

Do you need business cards in a virtual world? When you can just e-mail your newfound client immediately, or instruct him how to add your name to his BlackBerry?

Do you need an office?

Do you need a zillion employees?

Image might be important with an act, but in business, your product, your success is your image. No one cares how clean the factory floor is.

I LOVE this one!

I was listening to Richard Roeper on Howard Stern, he lamented the guest hosts from Hollywood who co-starred with him on "At The Movies" would say nothing negative, for fear of alienating some potential business contact. But it’s when you say something negative that you endear yourself to a group! And if you’re offering a better product…

I beat up Ann Powers the other day. I feel a bit guilty. But first and foremost, she should move back to L.A. or be fired by the L.A. "Times", second she should know her writing is so dense and overwrought as to make me quit reading it each and every time. If I don’t say she sucks, who will? How will she ever improve? Then again, if I’m saying she sucks, I’ve got to be better. And I’ve got to believe you’re going to rally around me, the independent, and agree.

That’s risky. Are you willing to take that risk? Are you willing to state your truth and own it? Elton John talks shit about other people. But most acts demur. I’d like Jon Bon Jovi if he just said SOMETHING or SOMEONE sucked. But he’s so busy sucking the public’s dick I miss no chance to beat him up, point out his band’s foibles, because he’s not real…and I know many people agree with me. Then again, most people are indifferent! And only by taking a side can you get them to care!

Build it, don’t try to nuclear bomb people into submission. Advertising slides right off of us. Be real. Online. Win our hearts. Consistently.

This is about deciding what’s in and what’s out.

Talk to a great creator, he’ll tell you sometimes you’ve got to leave the best stuff out, because it doesn’t fit, it ruins the whole.

And then there’s Apple. Simple, simple, simple. It’s easy to add a button. But can you leave that button off and have the device do everything it needs to, without requiring a read-through of the manual?

Oh, there are so many other great points in the book. Like no meetings. Ever been on a conference call? What a waste of time.

No, I haven’t read the book. But I went to the Website, and I read the excerpt. And I’m glad to have someone on my side. Yup, these guys closed me just that fast, by stating their truth, by not pussyfooting, by not being afraid of alienating people, putting it out there so I can identify.

And I think you can too.

"Newsweek" article: " Chaos Theory: The new rules of management for people who hate rules. And management .”