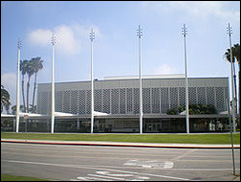 SANTA MONICA (CelebrityAccess MediaWire) — The Nederlander Organization is looking to be the management company to breathe new life into The Civic Auditorium in Santa Monica California and bring the venue back to its glory days of top rated concerts and shows. The venue had once been host to The Academy Awards and concerts such as Elton John and The Rolling Stones.

Nederlander has managed and operated some of the top venues for over 100 years. The Organization is hoping to revive the once flourishing Auditorium.

Nederlander was the only company that responded when Santa Monica’s City Hall put out the call for new management for The Civic Auditorium. Negotiations are underway according to the Santa Monica Daily Press.

"This is based on their years of experience, their financial capacity, their expertise in working with historic facilities," Jessica Cusick, the cultural affairs manager for City Hall, told the council on their choice for using The Nederalnder Organization. "First and foremost in our minds was their national reputation for quality and breadth of the products they provide."

The auditorium has needed some improvements for a significant amount of time and the council is hopeful that Nederlander who secures the big acts will be able to deliver them to the Venue. In May a vote by the Council to allocate approximately $25 million of Redevelopment Agency funding to pay for the renovations.

"Once the venue is retooled and renovated … both inside and outside, the civic will provide quite frankly the citizens of Santa Monica a better alternative to Los Angeles venues, bringing top flight entertainment but a lot closer to home," said Adam Friedman, the CEO of Nederlander Concerts, according to the Santa Monica Daily Press.

Welton Becket, a renowned architect and a designer for Capitol Records was also the Architect for The Civic Auditorium erected in 1958.

"This is an exciting and hopefully a historic opportunity for the city," Councilman Richard Bloom said regarding the partnership with Nederlander. "If everything works out, (it will) create that cultural hub of the city that we have been talking about for so long, kind of recreate what's already there." –by CelebrityAccess Staff Writers