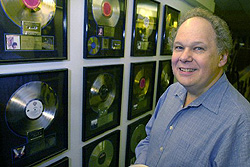 By CLARKE CANFIELD
Associated Press Writer
Just ask Bruce Springsteen. Or Eric Clapton. Or Lou Reed. Or any of the hundreds of other musicians and record producers who make up his client list.

As a mastering engineer, Ludwig puts the final creative audio touches on recordings before they are shipped off to be manufactured into millions of compact discs.

His company, however, isn't in a musical hotbed like New York, Nashville or Los Angeles. Instead, Gateway Mastering Studios is in Portland, a small seaport better known for lobsters and lighthouses than music.

Ludwig moved to Maine for its quality of life nine years ago after working in New York for more than 25 years. When he built his studio, his business plan called for a 20 percent reduction of his workload.

But business is so good, Ludwig's always booked three to four months in advance. He masters about 270 albums a year — at an average charge of $5,500 per album — and attracts some of the biggest musical superstars to Portland.

"I've been very lucky since we opened the doors," he said. "It turns out I'm busier than in New York, which hardly seems possible because I was really busy there."

"Bob's the Michael Jordan of the industry," said Doug Levine, owner of Masterdisk Corp. in New York, where Ludwig was chief engineer for 16 years. "He's referred to as one of the golden ears of the industry."

Gateway Studios is nestled under a parking garage, a couple blocks from downtown.

Inside, Ludwig's primary work spot is his mastering studio, where he listens to recordings and makes the final adjustments. He does things like make vocals louder or quieter, liven up instrumental tracks, or simply bring the different musical parts into unison.

Everything about this room is coordinated to enhance the music. In fact, it was designed with custom software to mathematically calculate the perfect listening environment.

The studio's floor, for instance, "floats" above the concrete foundation to minimize vibration. The six-foot speakers are placed to the inch, and the back wall and ceiling diffract sound waves. The height of the ceiling, the length of the walls and each angle are calibrated for perfection.

Ludwig, 57, flips a switch and the sounds of the latest Art Garfunkel album fill the room. They cut through the air with a clarity and richness that you could scarcely imagine on a home stereo system.

In the past couple of years, Ludwig has expanded into DVDs, and he now has 12 employees and another mastering studio.

Hanging on the walls are framed gold albums he has worked on. There's the Rolling Stones, Natalie Merchant, the Grateful Dead and Def Leppard. Madonna, Foo Fighters, U2, Metallica, Dire Straits and Sting. ZZ Top, Pink Floyd, John Mellencamp, Frank Sinatra. Tony Bennett, Springsteen, Clapton. And on and on.

Ludwig has mastered more than 7,000 albums in his career. Thirteen have sold more than 10 million copies. He has won the top awards in his profession.

As Ludwig gave a tour one recent day, he received a phone call from Lou Reed, asking about an upcoming album that Ludwig will work on. They talked like old friends.

Unlike many engineers, Ludwig has a musical background. He has a master's degree in performance and music literature, and once played the trumpet for the Utica, N.Y., orchestra.

"He's got a very musical ear, he's not just a technician," said Bob Clearmountain, the owner of Mix This! studio in Los Angeles.

Despite the accolades, Ludwig is soft-spoken and keeps a low profile. He makes employees sign agreements to not disclose when artists are coming to Portland to work in the studio.

He cherishes living in Maine. In some ways, he said, being in Portland has turned out to be an asset for his business. It's fairly easy to fly to the city, he said, and it has a vibrant downtown without the distractions of New York.

Christopher Walsh, an editor with Billboard magazine, said Ludwig took a risk by moving to an out-of-the-way place and starting his own company.

"But obviously," Walsh said, "his gamble has proven right."