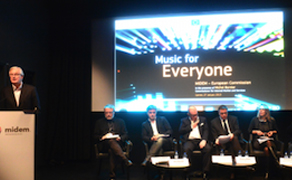 CANNES, France (VIP NEWS) — Today’s Music for Everyone panel session at midem was notable for the appearance of Michel Barnier, the European Commissioner for internal market and services, notably in charge of copyright.


The commissioner was in town to espouse his commitment to relieving the frustrations of digital music consumers, entrepreneurs and artists/songwriters at the current complexities of the market.


“Europeans are often frustrated at not being able to access online the diversity of content offered in other member states, even though they are prepared to pay for it,” he said.


Barnier won warm applause from the industry crowd by stressing that reforming copyright complexities will not trump a commitment to tackling piracy, though.


“Copyright is an essential driver in the creative process, but a right which cannot be respected is of little use,” he said, referring specifically to the current pet hate for music rightsholders: piracy sites funded by advertising, often from well-known brands.


“Is it acceptable to tolerate advertising revenues being gobbled up by a service provider who foster the free sharing of illegal music files?” he said.


Songwriter and journalist Helienne Lindvall was part of the panel responding to Barnier’s speech, and she noted that while her native Sweden is currently seeing a growth in recorded music revenues thanks to booming streaming subscriptions, this carrot has been complemented by a stick of legislation.


Referring to Spotify and others, Lindvall pointed out the need to “make those services thrive by doing something about illegal services – you cannot have a healthy market if you have a part of that market which is unhealthy and free… It doesn’t matter how many great licensed services we have if we don’t do anything about the other side.”


U2 and PJ Harvey manager Paul McGuinness was his usual quoteworthy self in the session, making the point that when the industry talks about the difficulty digital services have getting licences, it doesn’t always acknowledge the fact that there may be good reasons for this difficulty.


“When we talk about the availability of licences not being sufficient, very often we’re using that as a euphemism. Very often the people seeking licences suffer from let’s call it an ‘integrity deficit’. That’s the reason they don’t get licences, and they should not,” he said.


McGuinness welcomed the rise of Spotify, Deezer and similar licensed services, but warned that for now, “even for very big artists, the sums of money passing through those services are quite trivial… You could say that these services are mainly a promotional medium.”


But the juiciest part of the session was when the conversation turned to Google, which has something of a love-hate relationship with the music industry and creators across various elements of its business.


“I don’t want to engage in Google-bashing, but there is a sense of unease across Europe, across the world about Google,” said McGuinness, referring to the internet company’s promises to downgrade piracy sites in its search-engine rankings.


“Google have been making encouraging noises about restricting illegal sites or directions to illegal sites for acquiring music. The noises are very encouraging, but I’d like to see some action. It’s as simple as that.”


“I wish they would apply themselves and their extraordinary ingenuity to the micro-transactions that occur every time somebody listens to a piece of music over the internet. They can do it… There is a sense of unease, and a feeling they’re not really doing what they could be doing in this space. And I would like them to hurry up a level.”


Deezer CEO Axel Dauchez talked about Google, too, but for a different reason: the unfair competition he sees the company providing for European digital music services like his own. Something Dauchez described as a “cancer” for the industry.


“What I think the key word is is discrimination,” he said. “Am I a competitor to YouTube? Should I have the same deals as YouTube? Of course. When I am discussing with collecting societies and publishers can I say ‘just give me the deals that YouTube has’? Of course not.”


Dauchez said competition from Google and Apple in particular risks stymying the growth of European services.