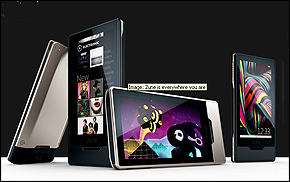 REDMOND, WA (CelebrityAccess MediaWire) — Microsoft has rolled out the latest iteration of their Zune portable media player with an expanded list of features to try to challenge the competitor Apple's dominant iPod family.

The ZuneHD has some interesting new features, including a greater integration with other Microsoft media platforms such as the Xbox 360. Previous Zunes had only been able to sync with a users' PC, but now a ZuneHD user can download a movie from Xbox Live, watch part of it on that platform, pause it then sync wirelessly with the Zune and pick up where they left off.

The video feature is also 720pHD, providing with a high definition quality picture that will rival that of Blu Ray, Microsoft claims. The touchscreen ZuneHD also features a built-in FM tuner and an HD radio tuner.

Microsoft is also beefing up their offerings and plans to have an online video marketplace available to Xbox Live subscribers by November. They are also planning to roll out third party games and apps that will be available through Zune's online marketplace.

Zune owners can also subscribe to Microsoft's music service for $14 dollars a month will offer unlimited free downloads and steaming – the catch though is that your downloads stop working if you discontinue your membership.

Despite these bells and whistles, Microsoft will have their work cut out for them in going up against the dominant player in the market, Apple's iPod. The iPod and its various iterations currently control about 75% of the market while the Zune's current userbase runs around 1%. The upgrades in features and the interconnectivity with other Microsoft products such as the Xbox360 might give the Zune a leg up on other players in the market such as Sony's Walkman and other devices that share that 25% of the market not occupied by iPods. – CelebrityAccess Staff Writers