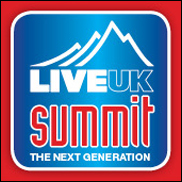 LONDON (CelebrityAccess MediaWire) –Now in its sixth year, the LIVE UK Summit will be focusing on The Next Generation – the young entrepreneurs who are emerging through the ranks to drive the live music sector. While this theme runs through the event, there will also be a strong presence from some of the industry’s top players.


Also contributing will be Coldplay and Snow Patrol agent Steve Strange of X-ray Touring and Geoff Meall of The Agency Group, who represents acts such as Muse and Paramore.


Other sessions will cover topics such as the boom in live show streaming, brand investment in events and artistes, the media’s continuing love of festivals and how artiste managers are holding onto an ever-more complex business model.


Summit producer and LIVE UK managing editor Steve Parker said: “This Summit is going to be a stimulating mix of veteran experience and the latest ideas and technology for making live music events successful.


“What makes the live industry so exciting is that it’s in a constant state of flux, and anyone who, for example wants to enter the agency world, needs to know how social media works, as well as how to negotiate deals with people from potentially dozens of countries.”


The LIVE UK Summit takes place at the Radisson Blu Portman Hotel in London’s West End on 9 -10 October. Reduced rate registration is available at £245 plus VAT, a saving of £50 on the full rate. A networking Thames Cruise will be held on the evening of 9 October. Visit
www.liveuksummit.com for more information and to book tickets.


The event culminates on 10 October with the Live Music Business Awards, held at the same venue. Tickets are available, with substantial discounts for Summit delegates, at www.livemusicawards.co.uk. –by CelebrityAccess Staff