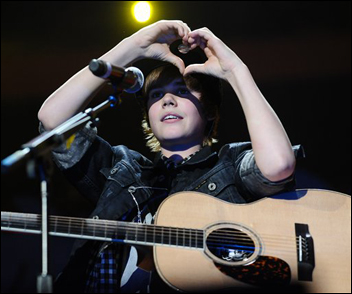 NEW YORK, NY (CelebrityAccess MediaWire) — Justin Bieber announced his first headlining tour of North America. The "My World" Tour, presented by AEG Live and featuring Sean Kingston as special guest, will open June 23rd at the XL Center in Hartford, CT, and blaze a trail through more than 40 cities before wrapping up in Allentown, PA on September 4.

In conjunction with the "My World" Tour and the release of My World 2.0 – the brand new official Bieber Fever Fanclub website will officially launch.

My World 2.0, a new album of 10 all-new songs, is the follow-up to Justin's debut album, My World, released in November. My World, which earned RIAA platinum in just a few short weeks, contained Justin's first four Top 40 hits on the Hot 100, "One Time" (certified RIAA platinum), "One Less Lonely Girl," "Love Me," and "Favorite Girl." Justin is the first solo artist in history to send four songs from a debut album into the Top 40 of the Billboard Hot 100 prior to the album's release.

Included in the campaign for the new album launch is the chance to win a Golden Ticket. The lucky winner will receive an all-expense paid weekend trip to the Atlantis resort in the Bahamas. The winner and his/her family will also attend Justin's concert on June 12th, put on by the Atlantis Hotel. The show is a sneak peek into Justin's tour.

Born in Stratford, Ontario, Justin Bieber is a multi-talented singer, and a self-taught musician on drums, guitar, piano, and trumpet. To date, he has surpassed 150 million YouTube views (the first 50 million of them as an amateur starting in 2007, posting renditions of his favorite hip-hop and R&B songs). Also in 2007, his manager Scooter Braun introduced Justin to the music industry in Atlanta. There he met multi-platinum superstar Usher, who signed the 13 year-old to his first professional deal and formed the RBMG joint-venture label with Braun and Antonio 'L.A.' Reid, Chairman, Island Def Jam Music Group.

Additional dates in Canada and the U.S. will be announced shortly.