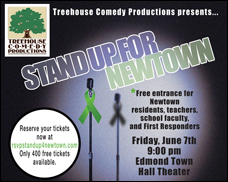 NEWTOWN, CT (AP) — In comedy, timing is everything.

Less than six months after a gunman killed 20 first-graders and six educators inside Sandy Hook Elementary School, Treehouse Comedy Productions plans to put on a show at the Edmond Town Hall in Newtown, Conn., to benefit those affected by the massacre.

The event, "Stand up for Newtown," will be held June 7.

Treehouse founder Brad Axelrod said he has produced about a dozen shows in Newtown over the years and thought about doing a benefit immediately after the Dec. 14 shooting.

But there already were plans for concerts and theatrical productions, and athletes were making trips to visit. Those, he said, seemed more appropriate than what he had in mind.

"I just didn't feel that comedy a month or two months or even three months out was the appropriate time," he said. "There needed to be a time of healing first. But there also needs to be a time when people can move on with their lives."

"Laughter is a great therapy," he said. "And after something like this, we don't feel like laughing, but we really need to laugh and enjoy ourselves again. I think this will bring the town together over something fun and help us rebuild the morale of the town by having a common experience."

Schmidt, 67, also administers a charity fund for the local Lion's Club's that is raising money to help provide mental health services for victims' families, first responders and children who witnessed the shootings at the school.

Proceeds from the show will benefit that charity and the Newtown police union. Schmidt said his group has raised about $150,000 so far and spent about $70,000 of that. They hope the show will give them a little bit more money, and perhaps a lot more publicity, so they can keep the fund going.

Koenig, who is from the Rockaway section of Queens, said he's done several benefits this year for Superstorm Sandy victims, and he's found that laughter can help people affected by a tragedy release pent-up emotions. He said picking appropriate material for the show is important.

"I wouldn't do anything that's inappropriate or would touch on the subject in a negative way," he said. "You want to hope that people can come and laugh again. And if they can't, you understand that, too. But it seems like maybe waiting until June, this might be a good time. We'll see."

The show won't include any jokes about guns and politics, sexual innuendo or profanity, Axelrod said.

Koenig, who does a lot of musical impressions, said his set will include a Bruce Springsteen riff and an impression of an old man in the future doing the hits of his lifetime.

"These people are professionals," Axelrod said. "We earmarked talent that we know what they do. This is all PG-13, maybe soft R stuff."

Axelrod said he had planned a much bigger show at the Mohegan Sun Casino, about 90 miles away from Newtown. But arrangement to bring in headliners Kevin James and Dennis Leary fell through because of scheduling problems. He said that led them back to doing something smaller in Newtown, which, he said, might be the best thing.

The venue seats about 525 people. The first 400 tickets were given out free to town residents, including police, EMS and teachers at Sandy Hook.

The show also will include a silent auction, featuring trips to Mohegan Sun and overnight excursions to New York for tapings of the "Late Show with David Letterman" and the "Rachael Ray Show."

Treehouse hopes to raise a few thousand dollars during the benefit. But those involved said it's not about the money, it's more about the funny.

"I know a lot of comedians would shy away from doing this because they are not sure it's appropriate," Koenig said. "There never will be a time when we can heal all of this with comedy, but they say laughter is the best medicine for a reason."