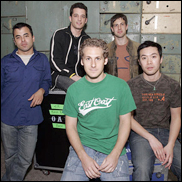 ORLANDO, FL (CelebrityAccess MediaWire) — Hard Rock International is teaming up with several top musicians and bands for its 2009 global Imagine There's No Hunger campaign to benefit WHY, a nonprofit organization that strives to fight against hunger and poverty in America and around the world. On Monday, November 9, 2009, Imagine There's No Hunger will kick off at Hard Rock Cafe New York with a star-studded Red Carpet and Benefit Concert, headlined by Artist Ambassadors O.A.R., also featuring a performance by singer/songwriter Arno Carstens. Hard Rock's exclusive event will feature appearances by several artists and other special guests who are committed to the cause.

Food for Rock . . .
Fans will have the chance to gain access into the exclusive, intimate benefit and concert event at Hard Rock in Times Square by supporting the cause. Beginning November 5th at 9 A.M., fans are encouraged to donate non-perishable food items to either The INN (Interfaith Nutrition Network), located at 211 Fulton Ave in Hempstead, Long Island; the Community Food Bank of New Jersey, located at 31 Evans Terminal Road, Hillside, NJ; or Yorkville Common Pantry at Eight East 109th Street, New York City. The first 100 fans (first-come, first-served) at each location to donate FIVE non-perishable food items will receive a wristband for access into Hard Rock's V.I.P. event on November 9th. Fans who donate 10 or more items will receive two wristbands to gain entry into the event (limit two wristbands per person).

Imagine There's No Hunger . . .
Setting the foundation for the 2009 Imagine There's No Hunger campaign, the event launches Hard Rock International's SERVE4 digital album, a project dedicated to serving those in need. Following John Lennon's lead track "Gimme Some Truth," donated by Yoko Ono Lennon, SERVE4 will also feature versions of rare, live or previously unreleased tracks from some of music's most influential artists, including O.A.R., who donated a previously unreleased, live track of their hit "Lay Down." Other featured artists include Elvis Costello with Allen Toussaint, Uncle Kracker, Eric Hutchinson, Arno Carstens, Brett Dennen and many more. SERVE4 will be available at Hard Rock locations around the world and on www.hardrock.com beginning November 9, 2009, with digital downloads available at iTunes and Amazon.

"We believe every human being has the right to thrive in this life," said Marc Roberge of O.A.R. "By raising awareness and funds we hope to get closer to an end of world hunger so that all people can one day enjoy these most basic of rights. We are honored to be working with Hard Rock International and WHY Hunger as Ambassadors for the 'Imagine There's No Hunger' campaign."

Dedicated to its Love All, Serve All motto, Hard Rock is donating 100% of net proceeds from SERVE4, additional "Imagine There's No Hunger" merchandise and the kick-off event at Hard Rock Cafe New York to WHY and its grassroots partners around the globe that have developed ways to feed children worldwide who are victims of poverty and also teach them farming and entrepreneurial skills for the future. –by CelebrityAccess Staff Writers