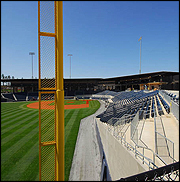 LAWRENCEVILLE (CelebrityAccess MediaWire) — Gwinnett County missed the a key deadline after failing to secure a naming rights deal for the new Gwinnett Stadium.

According to the Atlanta Journal-Constitution, the deal with the Atlanta Braves, which expired at midnight on Monday, would have seen the county collect all proceeds from a naming rights deal above the initial $350,000. Now that the deadline is expired, any naming rights deal will see the Braves net the first 350,000, Gwinnett County will collect the next 350,000 and then the two entities will split the remaining income from the agreement.

The Gwinnett Convention and Visitors Bureau had been conducting the search for a naming rights sponsor but the contract now stipulates that the Atlanta Braves will take over the hunt.

"I believe the Convention and Visitors Bureau did everything they could to market it," said County Administrator Jock Connell told the Journal-Constitution. "It’s just unfortunate that we find ourselves in the midst of one of the worst economies that anyone can remember — not an environment conducive to naming rights deals."

The County had been planning to use income from a naming-rights package to help offset $33 million in bonds issued to underwrite the cost of developing the $64 million dollar stadium. City officials remain upbeat, despite this set back and noted to the AJC that proceeds from a 3% tax on rental vehicles has been producing more revenue than expected. – CelebrityAccess Staff Writers