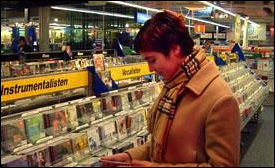 First-half revenue from physical and digital music formats rose to a total value of €660 million, up 1.5% compared to the first-half of 2012, according to the Assn. of the German Music Industry (BVMI). It’s the first uptick in the German recorded music market for more than 10 years.

The largest gains were in digital. Revenue from downloads and music streaming grew by 16% in the first half, offsetting the 2.5% decline in shipments of physical recordings. Though the popularity of physical soundcarriers continues to diminish, the rate has slowed significantly compared to previous years.

“Music usage is shifting to digital formats, but unlike in many other markets, here in Germany this shift is not occurring at the expense of the overall market, but indicates a market diversification with positive portents,” comments Florian Drücke, managing director of the BVMI, in a statement.

Physical recordings still form the backbone of the German recorded music industry. The BVMI reports that 75.5% of revenue came from physical product. The CD is still the No. 1 format – by a distance. The CD format slipped in value by 2.7% but still accounts for 67.5% of all recorded music revenue. Vinyl continued its niche-market comeback, which began in 2006. Shipments of vinyl increased by more than 30% year-on-year, and the format now represents 1.8% of the total market.

Digital music accounted for a quarter of first-half revenues. The download business grew 5.3% year-on-year and now generates some 20% of the market’s sales. The relatively young market segment of streaming (subscriptions and ad-funded) doubled in value and is now 4.6% of the market.

“Music is back-again – not least of all in economic terms,” Frank Briegmann, president Central Europe, Universal Music Group International and Deutsche Grammophon tells Billboard. “There is virtually no technology vendor of platform operator who can afford to do without an attractive offer of music. After a period in which the main focus was on technological innovation, content is king again. At the same time, music is not only attractive legal content which is available on the net and elsewhere but has also become an interesting investment again.”