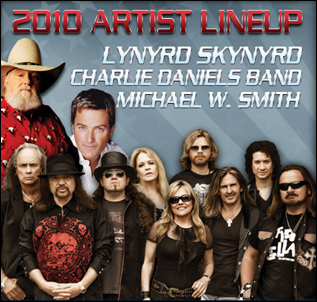 WASHINGTON DC (CelebrityAccess MediaWire) — Political blogger Debbie Schlussel has leveled allegations against political pundit Sean Hannity that his Freedom Concerts are a financial scam. Not true, says the The Freedom Alliance, who assert that the concerts, which spread from New Jersey to California with head liners including Lynyrd Skynyrd and The Charlie Daniels Band, are anything but. According to the Freedom Concert website, over $10M has been raised for the Freedom Alliance Scholarship Fund since 2003 through the Freedom Concerts and generous donations from the Sean Hannity Show and its listeners. The Scholarship Fund is designated for the education of children of U.S. service members who have been killed or 100% permanently disabled in an operational mission or training accident. All net proceeds from ticket sales (after musical talent, production, promotion and venue expenses) are donated to the Scholarship Fund, aiding greatly in this effort to assist hundreds of families who have lost their loved ones while they were protecting and defending our nation and our freedoms.

This information wild fired through the blogosphere and the Freedom Alliance felt need to respond.

This week, false and malicious allegations about Freedom Alliance were posted on the Internet and we want to address them with you. We don’t know the motivation for these vicious smears, but we will not allow them to go unanswered.

First, we want to thank you for your support and assure you that Freedom Alliance’s record of financial stewardship and programmatic achievements not only meets, but exceeds standards of program efficiency set by most charity evaluators. We are extraordinarily proud of our work at Freedom Alliance and stand by our efforts 100 percent.

1. The blog posting accuses our friend Sean Hannity of personally benefiting from Freedom Alliance.
This is FALSE. Freedom Alliance has never provided planes, hotels, cars, limos, or anything else to Sean. Sean gets nothing from Freedom Alliance except our gratitude for his personal generosity and for all he has done to help the troops and our organization. We have never had to ask Sean for anything, he always generously offers his help before we have a chance to ask him. But to be clear Sean pays for all his own transportation, hotels, and all related expenses for himself and his family and friends and staff, which over the years has added up to tens of thousands of dollars. He does not use any Freedom Alliance Funds or Concert funds in any way, period.

2. Sean Hannity has contributed $100,000 to the Wounded Warriors Foundation, over $200,000 to the Freedom Alliance, and over tens of thousands of dollars to other military charities and individuals. We only make this information public because of the outrageous slander against him. Sean has no management or operational involvement in, or control over, Freedom Alliance. He has been a selfless patriot in his efforts to raise funds for the education of children of armed services personnel.

3. The blog posting accuses Freedom Alliance of spending less than 20% of money raised on program activities. This is FALSE. Listed below are the amounts that Freedom Alliance spent for each of the past three years and the categories on which they were spent. The figures are taken from our Federal Form 990 which is filed with the Internal Revenue Service and posted on our web site and audited by an independent auditor using Generally Accepted Accounting Principles. This financial record not only meets, but exceeds standards of program efficiency set by most charity evaluators.