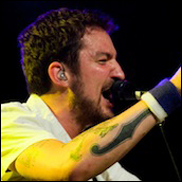 LONDON (VIP NEWS) — Frank Turner has cancelled three European festival shows because of a back injury.


In a statement on his website, he explained a "slight issue" with his back that started in June has become something he now has to "deal with".


The singer adds being in hospital for a spinal epidural shot means there is "no way" he could play Pukkelpop, Gampel or Highfield Festivals this weekend.


"People coming to Reading and Leeds need not worry," the 31-year-old said.


"The shows will go ahead, we are working on a plan, and if I have to do them in a wheelchair I will."


This year's Reading and Leeds, which takes place between 23-25 August, will be headlined by Green Day, Eminem and Biffy Clyro.


The singer also talked about his frustrations about not being able to perform at the festivals in Belgium and Germany.


"I am not a machine," the singer/songwriter said.


"Anyone who knows me even vaguely will know that, as well as being in a fair amount of pain, I'm filled with rage at my puny weakling back for letting me down, not to mention all the people at the shows.


"I can only humbly apologize. Hopefully I can sort this issue now and going forward I'll be fine to keep touring til I'm old and grey.


"Everyone in my team, from the Sleeping Souls on down, are being really great about making sure that the show goes on. Thanks for your patience and good wishes."


There has been no news about Frank Turner being replaced at the festivals. –according to BBC