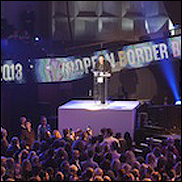 LONDON (VIP NEWS) — The best European music festivals, artists and promoters of 2012 were revealed at a sold-out ceremony, which took place at Groningen’s De Oosterport in The Netherlands, on the opening night of Eurosonic Noorderslag.


Decided by a combination of public vote and industry juries, Festival Awards Europe is the only event solely dedicated to recognizing the contributions and achievements of the event organizers and performing artists that generate billions of Euros for local economies and brighten up the summer for tens of millions of festival-goers each year.


This year’s awards were a heightened celebration of triumph over adversity in the wake of a challenging year, which has seen the festival market shaken by economic instability, claims of saturation, some high profile cancellations and the some of the wettest weather on record.


A record number of fans turned out to cast their support in the form of over 1 million public votes, showing that passion for festivals across the continent has never been stronger.


Best Medium-Sized Festival was won by Heineken Balaton Sound in Hungary (smaller cousin of last year’s Best Major Festival, Sziget) whilst the title for Best Small Festival was taken back by 2010 winners Tauron New Music Festival in Poland – a festival that took place in a disused coal mine, highlighting the creativity and diversity of Europe’s contemporary modern festival landscape.


Best European Line-Up and Artists’ Favorite Festival went to established giants in the form of German twin titans Rock am Ring/Rock im Park and Denmark’s colossal Roskilde, respectively, the latter approaching its 43rd edition this summer. The two most important industry-facing awards will both be taken back to Belgium with the team behind Pukkelpop declared Promoter Of The Year – a heartwarming accolade in light of the tragedies that befell the event when it was hit by a freak storm last year. And, as previously announced, Herman Schueremans from the country’s division of Live Nation received the Lifetime Achievement Award.


The USA even managed to scoop an award with Foo Fighters voted Headliner Of The Year, whilst Sweden’s Lykke Ly seduced crowds across the Continent with ‘I Follow Rivers’ topping the polls for Festival Anthem Of The Year. Not content with just winning an award at the European Border Breaker Awards in the same town earlier that evening, Of Monsters And Men sealed their title as one of Iceland’s most promising music exports by claiming the award for Best Newcomer.


The following awards were decided by the online public vote:


NEWCOMER OF THE YEAR in association with Eurosonic Noorderslag:
OF MONSTERS AND MEN (Iceland)


The following winners were chosen by an industry jury, which included prominent journalists, booking agents, managers, artists and promoters:


PROMOTER OF THE YEAR in association with Audience Magazine:
PUKKELPOP (Belgium)


Steve Jenner, Festival Awards co-founder, comments: “This edition of the European Festival Awards has been a great and much needed celebration for the industry as a united whole. A significant increase in events rallying to take part suggests a healthy display of confidence, competitiveness and pride. The staggering number of public votes received shows that people’s appetites for festivals have never been greater. In the face of toughening conditions, the forecast still looks bright for Europe’s festival market”.